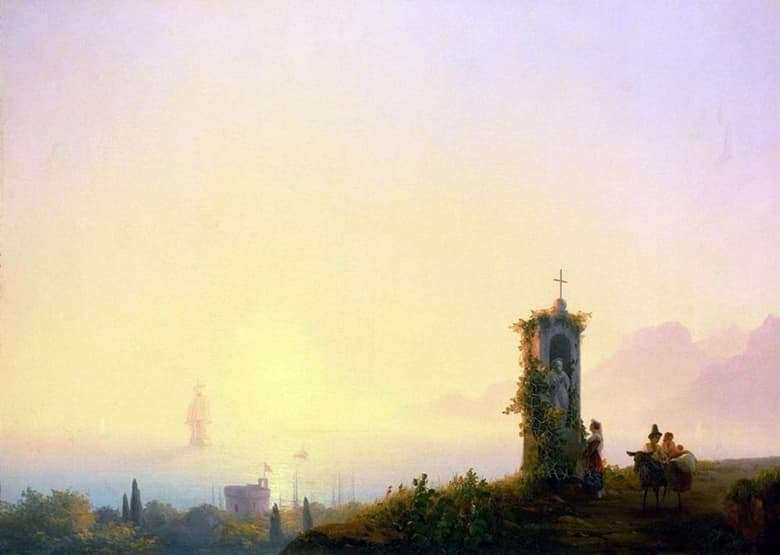 Incredibly fruitful for the artist 40s. XIX century. At that time, he traveled a lot and tried to show off his scenes as much as possible in his paintings. Judging by the clothes of people, reminiscent of traditional Italian clothes, and, rather, the Catholic cross on the roof of the chapel, here is presented the romantic landscape of sunny Italy. The words of the painter that a true master should be able to draw from memory are well suited to this warm and sublime canvas.

As often happens in the works of the artist, the foreground is darker and heavier. On the hill stands a chapel pillar with a niche for the sculpture of the saint, beautifully overgrown with climbing plants. Travelers came to him to pray for a good road or to thank for a safe return. With their help, the general proportions of the panorama become visible.

Closer to the coast is the southern port city, hidden by bluish shadows and lush greenery – only a fortress tower with a roaring flag and thin masts of moored ships on the pier at this distance can be seen. They are echoed by stretching up the dark green cypress.

Two-thirds of the canvas is occupied by the majestic sky. A light haze of clouds hid the hot sun, presenting beautiful color combinations. The sky shines with transparent golden, pinkish and lilac colors. It is reflected in a pastel, calm sea, along which a graceful mnogomacht sailboat slowly moves. On the right, closer to the line of an almost indistinguishable horizon, cumulus clouds similar to the silhouettes of mountains gradually block the light.

Despite the presence of clear contrasts, the composition is well thought out, and its three horizontal parts (celestial, sea and terrestrial) are connected by verticals of buildings, trees and ship structures to support the sails.