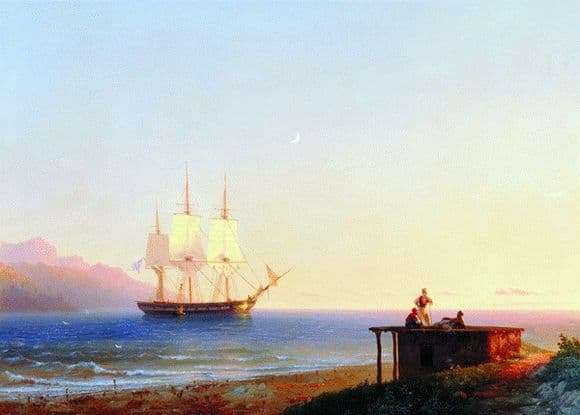 The works of Ivan Konstantinovich Aivazovsky are truly precious heritage of Russian painting and culture. The whole life of the greatest marine painter is like a chain of wonderful acquaintances and events that allowed the talented Armenian boy Hovhannes Ayvazian to quickly and successfully develop his invaluable gift from his youth. The sea, on the bank of which the future genius was born in the cozy port of Feodosia in the Crimea, became part of Aivazovsky and his entire long creative life splashed onto his canvases the energy of foamed waves and the beauty of coastal landscapes. The noise of voices in the city market, where Ivan often went with his father, the rumble of the surf, the creaking of the tarred hulls of ships entering the port, created in a boy storms of emotions and bursting with rapid sketches on paper, and when it was not enough – on the whitewashed walls of southern houses. These are the drawings of sea battles,

The painting “Frigate under Sail” was written in 1838, when young Aivazovsky, a student of the Academy of Arts in St. Petersburg, was sent for an internship in his native Crimea two years before graduation, so that he would go to Italy for 6 years.

The frigate is a small ship with full artillery armament on board and served to protect merchant ships and routes and maneuver actions in the composition of large squadrons. And Aivazovsky places such a warship with sails raised to the center of the whole composition, surrounding it with a calm calm sea in the dawn lilac mist and figures of Oriental merchants peacefully talking on the roof of a fishing shack. A pale thin month is still visible, but the sun has already spread hot legs on a stone path, a distant quiet horizon and the tops of small mountains surrounding the bay. Even the air in the picture is still trembling in the ringing silence, but one feels that it is about to be flooded with a hubbub of birds, loud conversations from people rushing to the market, the military on the ship, starting their combat watch.