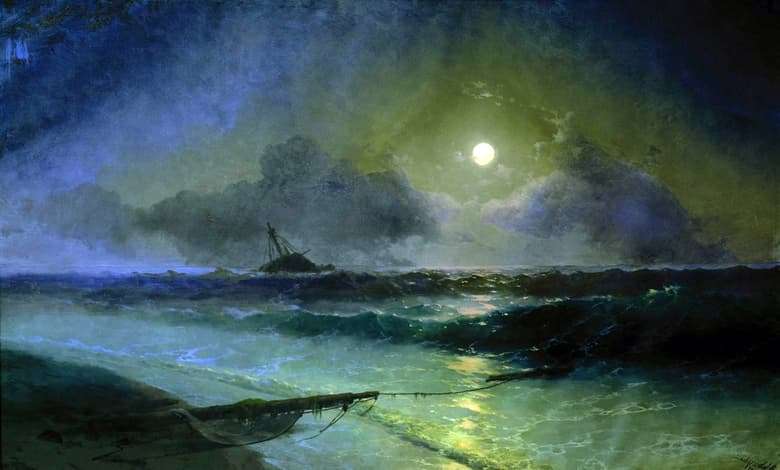 The picture belongs to the period when the artist in his pictorial style had already reached perfection, but, despite his considerable age, he was not going to stop painting – the 90s. XIX century. were incredibly fruitful. The master even rewrote this canvas in 1899, making a practical mirror image.

Theodosius, the native and beloved city of Ivan Konstantinovich, more than once appeared in his works and remained forever in the heart. However, here a detached onlooker sees only a piece of the Feodosia coast, onto which a mast with fragments of sail has been broken off by an algae-covered mast. The wreck of another, not yet completely sunken and banked vessel is visible in the distance. Probably, the ship ran aground or got a hole on the rocks. The tragedy occurred a long time ago, and now only the wind rules in a deserted expanse.

Above the restless sea full of breakers, the moon rises gradually, painting with its ghostly radiance a part of the sea and almost the whole sky in a yellowish-green, slightly painful and disturbing shade. The night light rises from a cloudy bed that resembles the silhouettes of animal heads: on the left a bear opened its mouth, on the right – a dog with erect ears.

A rather restrained palette was used, but the number of shades of blue – from dark azure to sapphire and green – from pistachio and turquoise to grass and dark green, is impressive. Unlike most works of the marine painter, the horizon line is well traced; this gives the canvas even more realism and draws attention to the majestic sky. It seems that now the waves will begin to move and rapidly fall on the shore, having watered everything around with salty splashes.