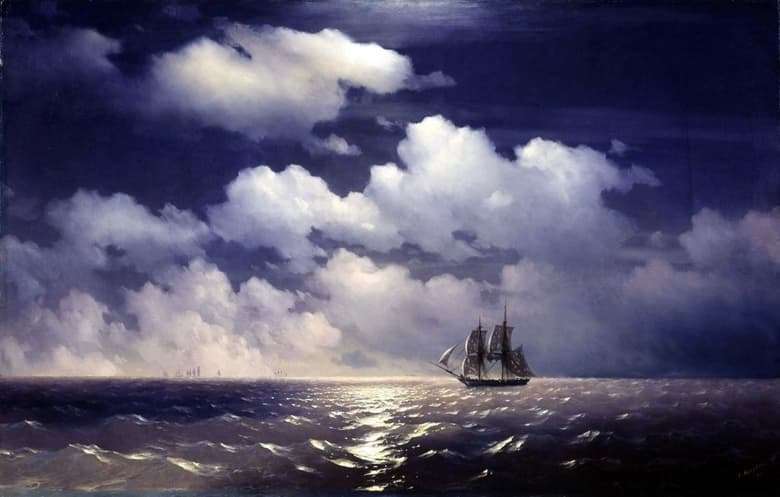 Written in oil on canvas in 1848, dimensions: 123.5 by 190 cm. Exhibited at the Mikhailovsky Palace (Russian Museum), St. Petersburg, Russia.

On the canvas of the famous artist depicted the return of “Mercury” under the command of A. I. Kazarsky after the heroically won victory over two ships of Turkey.

The clash occurred during the Russian-Turkish war (1828-1829) in the Bosphorus (Black Sea) in May 1829. Because of the calm, the Russian military vessel could not escape the persecution in time and was attacked by “Real Bey” and ” Selimiye. On the general council, the crew decided to accept the battle with honor, having only 18 artillery units against 200 from the Turks. The battle lasted two hours, at first with fire it was possible to break the mast at the first enemy ship, then at the second one. Under crossfire, the brig received serious damage, but lost only four sailors and was able to return to the fleet in Sevastopol. All sailors were richly rewarded, and the story got a lot of publicity.

It was at the moment of the return to the port that the battered, but not surrendered, ship with battered, gaping holes with sails is depicted on the canvas of Ivan Konstantinovich. Despite the great distance, which makes it possible to admire the night sea spaces, but hides the details, the viewer understands that the ship has withstood a serious battle. It is like a ghost in the silver light of the moon, but still afloat.

The whole picture is permeated with shades of similar colors and is in motion. Cumulus clouds run across the sky, perfectly contrasting with the dark, southern, rich blue sky. The wind blows the sails, the waves splash, traced with amazing diligence. They even shine slightly in the moonlight and look quite harmless, but they pose a threat. Only not this night, today the hero should calmly return to his native shores, so nature is a bit restless, but restrained.