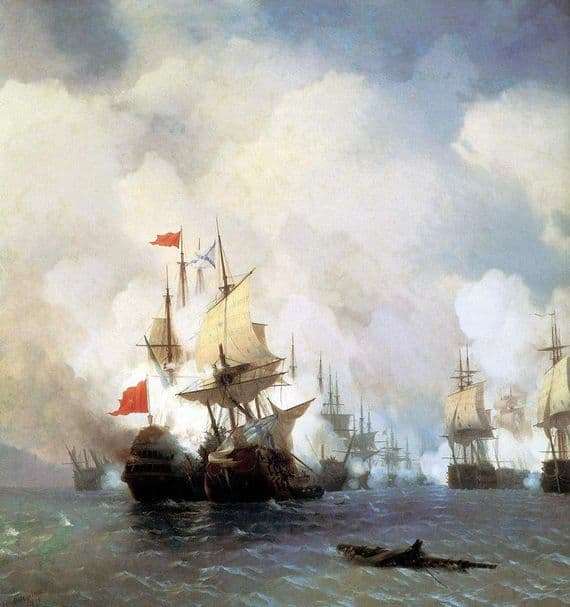 Aivazovsky – the most famous of Russian marine painters, he is known for his famous painting “The Ninth Wave”. From the genres he preferred landscapes – mostly sea or having at least some relation to the sea – or historical scenes.

In that battle, a rather risky approach was applied. Knowing that the enemy has a large numerical superiority, the command decided to converge with him, walking a straight line perpendicular to the location of the enemy ships. During the execution of the maneuver, the Russian ships were deprived of the opportunity to shoot, but they acquired greater speed and secured a quick approach. In addition, the enemy had to shoot at a tangent, which did not contribute to shooting accuracy.

The first ship in the line was “Europe”. In the middle of the maneuver, she lost control because of the damage and was forced to rebuild, becoming the third from the first ship. The first was the “Saint Eustache”, which focused fire on the “Burj-u-Zafere” – the flagship of the Turks, equipped with 80 guns. As a result of the attack on the flagship, a fire broke out, the sailors rushed into the water, hoping to escape, and the “Saint Eustathius”, who lost control, collided with the sides of their ship.

This moment is depicted in the picture by Aivazovsky. Two ships collide, hot smoke pours from them, the right one – “Saint Eustathius” – strongly heels, remaining without the ability to maneuver. And behind them, faced, the rest of the Russian ships are running smoothly.

In that battle, the Turks suffered a defeat.