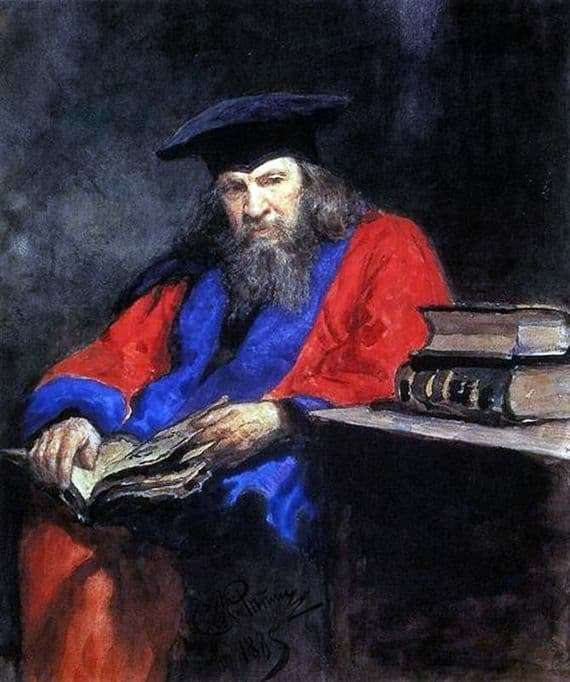 Repin is a Russian artist who preferred porter to all other genres, as well as a depiction of historical and everyday scenes reflecting the spirit of the era – the past or the modern master. Memoirist, rector of the Academy of Arts. Among his students were many talented painters, especially emphasize his contribution to the fate of Serov, to whom he gave private lessons. Repin’s paintings are characterized by accuracy, subtlety of sight and feather.

Portraits create a certain impression about a character, often underlined many times, all are distinguished by a noticeable love for people – it’s difficult to find unpleasant characters. “Portrait of Mendeleev” – one of the many portraits written by Repin, containing all the features characteristic of his works. This is a living, not iconographic expression of Mendeleev’s face, a thoughtful look to the side, slightly bowed head. These are colors that gently flow into each other, a blurred background against which a person stands out so that nothing distracts from his figure, which is central to the picture.

Repin also has a certain view on the person depicted – for example, Mendeleev, under his brush, is primarily an elderly scholar who has made many remarkable discoveries and made a notable contribution to science. This is in the expression of Mendeleev’s face – he thinks over the book, he is focused and detached. This is in his clothes – professor’s mantle, traditional quadrangular cap. These are books accompanying him – two on the table, thick volumes, emphasizing his scholarship, and one in his hands, the pages are held with his hand so that they do not scatter and close. This is a kind of ceremonial portrait, bringing to the fore not a man in a man, but his main function, which he made the goal of his life. And I managed to show her Repin just fine.