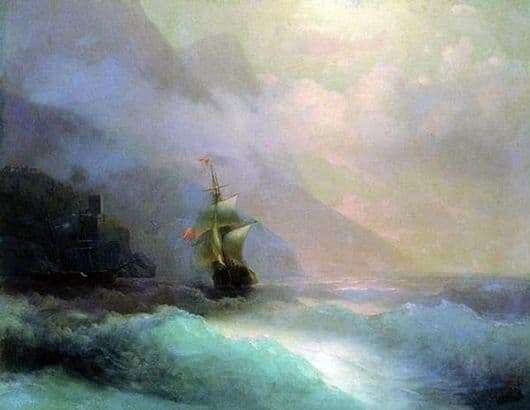 The famous marine painter Aivazovsky has several canvases depicting serene sea scenes. They strike with the color scale of the gentle and at the same time saturated colors, which play brightly in the rays of the sun.

This canvas was written in 1870. Before the eye of the observer the most beautiful seascape. It’s getting dark. A large sailboat gradually approaches the mountain shore. The sea is quite calm, the waves are small and quiet.

The picture is divided into two parts. On the left side, one can observe a rather gloomy landscape – mountainous terrain; behind the mist of fog, high, menacing mountains are hidden. The gloomy dark coast does not inspire tranquility. And even the sea off the coast is much darker.

On the right side you can see light pinkish-blue waves. The bright sky and bright sunshine is a completely peaceful landscape. It is in the middle of the two so unlike each other species is a sailboat. On the left side of the clouds are moving, the wind filled the sail. The ship has tilted, but the viewer understands that he will survive and nothing critical will happen. Once again, the picture reflects the violence of the elements, its fickleness and inconstancy. The viewer can feel the rising wind, light breeze and the smell of sea water.

The sky is striking in its beauty – as if it merges with the sea. Almost indistinguishable horizon line. Beyond the clouds, the golden rays of sunlight are barely visible. Clouds are written in light pastel colors. The artist painted clouds in pink and blue shades: the same colors are reflected in the sea waves.

From the picture breathes pacification, which is not overshadowed even by the oncoming clouds. “The lonely sail whitens…”