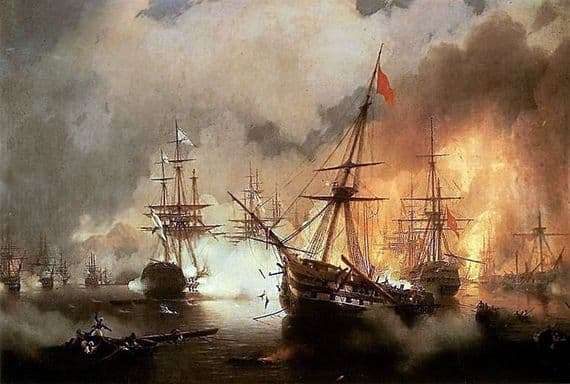 The artistic work “Navarinsky battle” was written by Aivazovsky in the period of romanticism in oil on canvas and belongs to such a genre of art as battle painting.

A famous artist completed his work on the painting in 1848, recalling how, as a child, he was often mentally transferred to far-off Greece, which fought for its independence. In his native Theodosia at that time everyone was talking about this hero-country.

During the defense of Greece, the British, French and Russians became allies of the Greeks. The main attack of the Turkish-Egyptian troops was received at the center of Navarino Bay by the ships of the Russian fleet. The very first to go into battle was the ship “Azov”, which received a retaliatory strike with a series of shots.

Brave sailors, drenched in water, walked through fire and smoke. One apt hit – and the enemy ship flew into the air, but the Azov was wounded. Despite this, the sailors were able to sink another Turkish ship to the bottom. The battle lasted only a few hours, but the Russians were able to destroy many Turkish ships during this time.

In 1829, the heroic Greece gained its independence, and the ship Azov and its commander Lazarev received the highest awards: the captain – the rank of rear admiral, and the ship – the flag of St. George.

It is this cruel picture of the Navarinsky battle that was painted on the canvas by I. K. Aivazovsky. The foreground opens to our eyes a picture of a sunken Turkish ship, where people are covered in a big panic.

In the central part of the canvas – depicts the battle of the ship “Azov” with the enemy frigate. It can be seen that the Russian ship is damaged, but the artist so skillfully built the composition of the painting that there is no doubt that, advancing, the Russian fleet will win, no.

For the master of the brush – Aivazovsky – this battle was not only the last battle in the history of the frigates, which glorified the fleet of Russia, but also the memory of the Armenian family that the Turks drove from their native land.