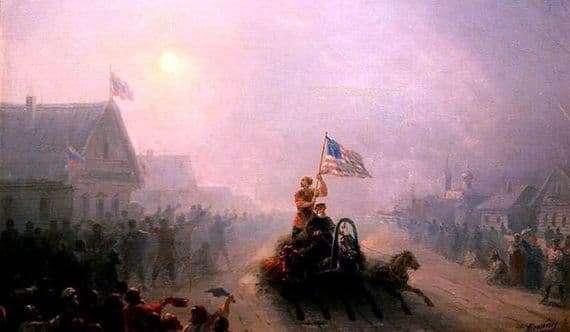 The painting, referring to the period of the 90s of the 19th century, in the center depicts a troika of horses galloping at full speed, driven by a gray-haired and thick beard charioteer. On the cart is a farmer in light clothing and proudly holding an American flag.

The events described by the picture date back to the time when American citizens gathered provisions for the starving Russians. This can be seen in the crowd of ordinary people: those who stand, stretching their arms forward and asking for alms, and who fell to their knees, as if they could not stand on their feet anymore. Everyone gathered here, young and old. Behind the cart, some people raised their hands up in greeting.

Along the entire street, along which flies three horses, stretched wooden buildings. By them it is possible to judge that the action of the painting takes place in a village or a small village with a church installed in it. On one of the houses

three flags are developing that belonged to the Russian Empire. The artist apparently placed him in the picture, wanting to achieve two goals: to show the unity of representatives of the low and middle class of two peoples, and also to inform the viewer that the plot of the work describes exactly Russia.

The time is most likely early in the morning. The sun has not yet risen high. The illumination of the street is dim, as if it is obstructed by the night mist circling above everyone.

It is symbolic that the troika of horses, and the peasant with the American flag, seated on bags of food, are drawn very clearly in contrast to other people and houses. The central image immediately attracts the viewer’s eye.

Aivazovsky, visiting the United States, left his work as a gift to an art gallery located in the capital of the country. Subsequently, there was a kind of “romanticization” of the image of the Russian people in the United States: the local society, as it were, separated him from politics and government.