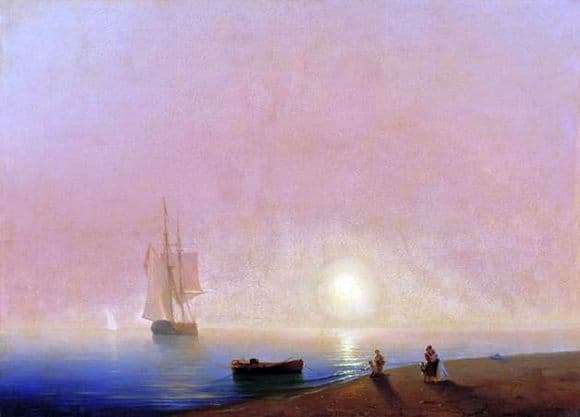 “Farewell” – a new sound in the works of the famous master of seascapes. Ivan Aivazovsky wrote this picture in 1868, at the very time when tenacious realism was removed from his technique, which earlier brought him to the top of fame. For example, this work can be traced to the emergence of improvisation and impulsiveness, apostasy from the blind “imitation” of the surrounding world.

In the new world, the compositional model of the image chosen by the artist also appears. Most of it is occupied by the sky, which attracts attention with its breadth and iridescent purplish-scarlet gamma. The translucency and tenderness of the colors gives the airiness, the effect of a predawn haze, softening the brightness of the rising sun. The plot is saturated with peace and melancholic sound. Charming elegy echoes the serenity of the sea surface.

Ivan Konstantinovich recreated the lyrical mood, which, taking into account the scarlet flashes, does not cause sadness or sadness. Gentle golden strokes dilute the scene of separation, forcing you to think about the joy of an early meeting. Family farewell on the seashore is touching and somewhat “sweet.” Romantic tensions inherent in Aivazovsky, do not disturb feelings. The ship, like a mirage, froze in the distance, and the boat near the shore waits patiently for the traveler to climb it. Everything around is covered with morning haze of harmony and silence.

A new way to build a dialogue with modern reality, however, did not exclude the tried and tested artistic tricks in the paintings. In other words, the artist did not abandon his principles, but transformed them. Especially clearly it appears in color. Ivan Konstantinovich changes the “exaggerated” colors to more restrained and filled with greater versatility. This gives a certain “fantasy” and a special lightness to the plot.