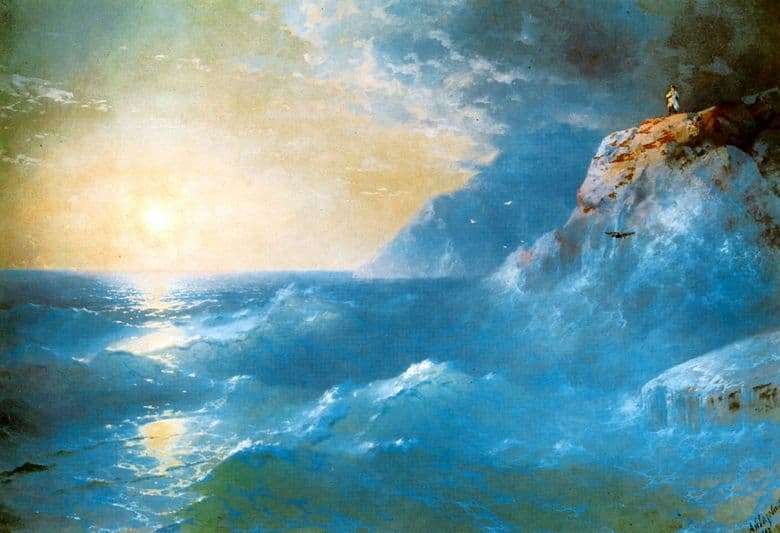 The canvas “Napoleon on St. Helena” was written by Ivan Konstantinovich Aivazovsky for the celebration of the victory over the French invaders in honor of the jubilee. The sensational name of the former emperor of France, the king of Italy, who voluntarily surrendered to the island of St. Helena who was exiled by the English crown, gave rise to the image of a romantic hero among the people even in the Russian Empire.

Despite the name of the picture, the main character on it is represented by a small, barely discernable figure who stands alone on a rock amid raging waves. Napoleon himself doomed to such loneliness, surrendering to the authorities of England, but proving thereby, the strength of his character, which Aivazovsky conveyed in his small figure, appearing before us in a magnificent pose.

He does not paint the face of the emperor, instead he makes one stroke with a brush, puts black dots instead of eyes and mouth, but no one doubts that Napoleon is in the picture – his uniform and hat. The main part of the canvas is taken by the element of water, which is emphasized by all shades of blue and blue.

The agitated ocean seems to reflect the mood of the prisoner. The eagle, which appears in inclement weather, symbolizes Napoleon, who left a mark in world history as an emperor, whose coming to power was completely unpredictable. The picture tells us about the great, but defeated commander, whose name will never be forgotten. Ivan Konstantinovich conceived a picture both for the Russian observer and for the foreign one, since in his time he traveled a lot around Europe.