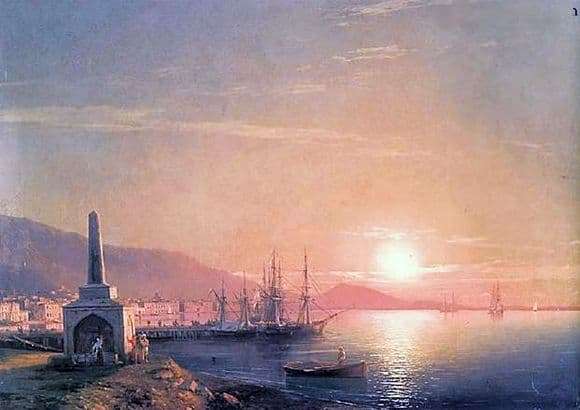 A vivid representative of Russian painting is Aivazovsky. His landscapes accurately convey the beauty of nature and create a special mood, immersing in a fabulous atmosphere.

One of such special, memorable works is “Sunset in Feodosia”. The painting depicts a sunset over a small port of a small Crimean town. Several small schooners moored to the shore, but approaching vessels of local fishermen could be seen in the distance. People stand on the beach and wave their hands, calling for a lone fisherman in a boat.

The artist accurately conveyed the atmosphere of the Feodosia evening, the end of a hard working day. You can feel the simplicity of life of the local population, plain clothes and warm waving hands. Such images speak of the openness of people. The city is depicted as a harbor, to which every evening they return, the atmosphere of home and comfort is felt.

Aivazovsky as the Crimean ship all the time returned to this harbor, here, in this small seaside town. The backdrop of the events are the majestic mountains that rise in the distance. This small town was lost among the mountain ranges and nestled on the Black Sea coast.

The painter conveyed the diversity of colors of the last sunshine illuminating the sea coast. Glare on the water, shadows and reflections create the effect of photography. Sunset symbolizes the end of the day and the preparation for something new, by dawn, which will bring change and a beginning in everything.

The artist spent a lot of time in the Crimea and depicted a large number of landscapes of this amazing land. For Aivazovsky Theodosius was a special city, the picture conveys the beauty and personality of this small town, lost among the mountain peaks.

It was here that the life of the painter was cut short, this place healed for many years and gave vitality. The master wrote his last work right here on the ninth ten of his life path.