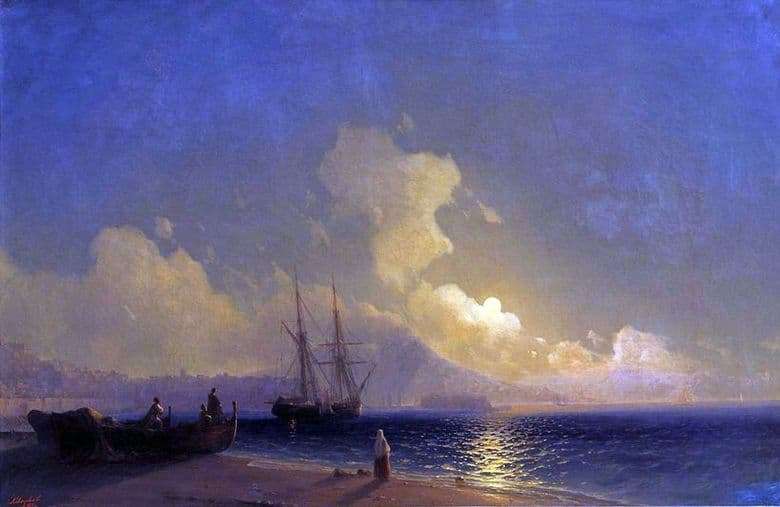 “Night at Sea” – one of the famous paintings that are among the night landscapes of Ivan Aivazovsky. It was written in 1854, when the difficult battles of the Crimean War unfolded in his native Crimea and in its vicinity. Despite the formidable military events that Aivazovsky himself witnessed in that year, this picture is imbued with the serenity and softness of the colors of nature.

On this canvas, the painter depicted the sea coast, describing the arc. The full moon is visible in the sky, slightly covered by passing light clouds. The sea is a little dazzled, and on it the moonlight leaves a yellow path. In the foreground are the barges of fishermen and the fishermen themselves resting on the shore; in the center is a tall figure of a woman whose face is turned towards the sea.

The background of the picture is partially hidden by fog. In this fog the silhouettes of sailing ships at sea are guessed, and behind them, on the far side of the coast, a mountain rises into the sky. To the left of the mountain one can see a small and sleepy town, also lit by moon rays.

Of great importance in the artistic composition of the painting is the play of light, which is characteristic of other, most famous works by Aivazovsky. The central place in the landscape is occupied by the moon, scattering its light in all directions and highlighting the objects facing it. The bright brilliance of the sea surface, which is slightly agitated under the wind, is expressive. The same effect is enhanced by soft and smooth shadows left on a gentle coast. A special place in the plot goes to the clouds that form the main background of the image.