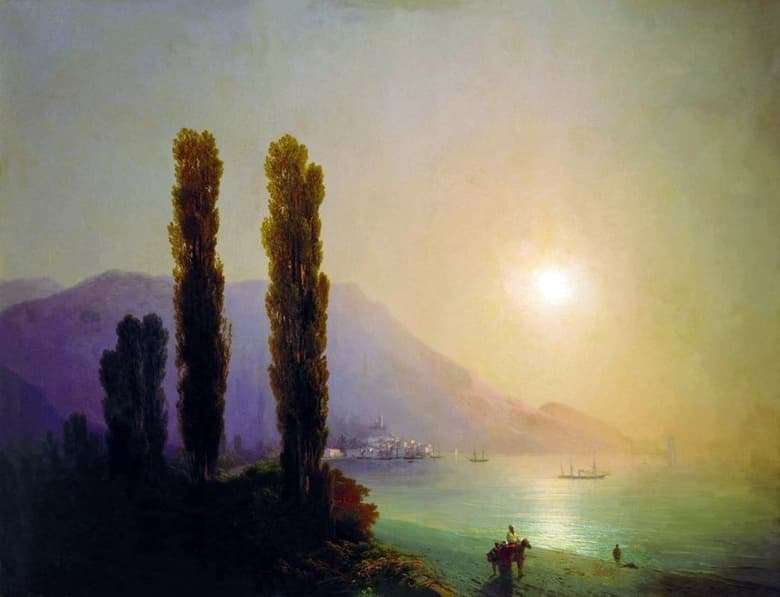 The Yalta shores and the city itself often appeared in the master’s works. But this time he is trying to penetrate the very essence of the early southern morning, when the air is still fresh and cool, the sea is calm, and the first rays of the sun rush from behind the mountains and the indistinct line of the misty horizon. Presumably, the artist relied only on his special impressions when he wrote the work in his workshop.

In the very background, almost hidden in a haze, there are mysterious silhouettes of Martian and Ayu-Dag, who Aivazovsky loved to write in different conditions. A small cape of St. John is a little closer, and outlines are visible on the hill – the recently completed (in 1837) Cathedral of St. John Chrysostom. Its high bell tower rises on Polikurovsky hill, a total of 45 m, due to its proximity to the water, it was included in the Black Sea navigation charts as a landmark. At the base of the hill perched on the shore variegated houses, the white walls of which shine in this light. Thin, sketchy lines indicate sailboats with retired sails.

In the left part of the picture, the attention is drawn to the unusual purple and dark purple color of the mountain, where the night darkness still lurks. It contrasts beautifully with the general scale and skyline. In the foreground, to the smallest twigs, slender cypresses with a translucent foliage are registered. Looking at them, it becomes immediately clear that the action takes place in the south, you can even feel that special smell of the sea and plants. Nearby people on horses seem very small, they are dressed in oriental costumes and could stop to admire the dawn. Probably, the painter depicted them in such a way as to designate the scale of the environment and emphasize the depth of perspective.