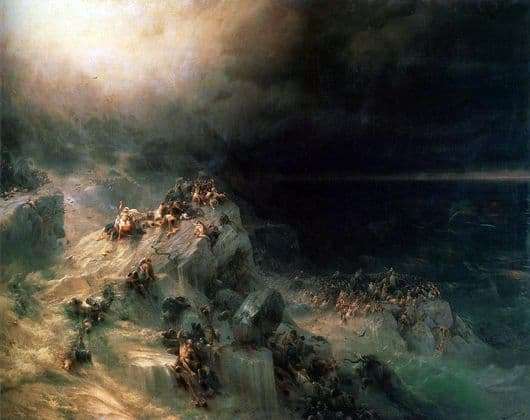 In the museum of the city of St. Petersburg, stored an amazing picture of the painter Ivan Aivazovsky marine painter called the Flood. Creation of the painting began in 1864. A masterpiece displayed the faith of the marine painter. A huge number of paintings was created on biblical themes. “The Flood” – the personification of the beautiful stories from the bible. The versatility of the art of Ivan Aivazovsky never ceases to amaze. The ability to paint life and emotions on paper makes you breathe heavily every person who has seen the artist’s work at least once in his life.

The sea of foam again appears in the picture of the great marine painter. This art canvas clearly shows the wild life of the sea element, rather than a tale from the Bible. The emphasis is on the side of the sea, its beauty and rigidity, the contours of the artist’s brush show the advantage of sea waves over all.

The catastrophic crest of the wave does not spare anyone. Established clear laws by which the marine element lives. They are relentless and cruel. Maritime luxury eclipses the full form of art, as power stands out with the speed of thought. It was very important for the creator to show how nature can be strong before man. It is impossible to defeat it, and if you hit the depths of the sea, you will not return back.

People who die in the abyss of the sea, show the role of this cataclysm. The powerful element attracts attention so much like hypnosis. Alluring sad set of colors predicts the death of people and the inability to escape. The contrast of the artistic picture is complemented by the horror and despair of a person who is left alone with the sea elements.

Together with the water sins and darkness go away, this is not death – the artist showed. The presented element is a glimmer of hope and faith, through darkness and sadness. For people, the only chance is to cleanse and receive mercy from the creator. The end result of the picture involves the exit from the abyss into another world – an area of goodness and light.