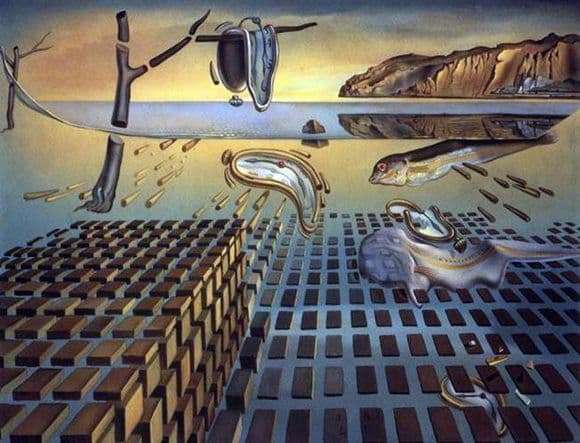 The eccentric Spanish surrealist Salvador Dali for his unique paintings spawned many myths and unsolved mysteries.

Surrealism as a genre found its full embodiment thanks to the gift of Dali. Many of his works are now on display in the Florida Museum, dedicated to the memory of the great surrealist and contemporary art. There is the work “Disintegration of memory persistence” there. The very name itself makes interested in imbued with the contents of the canvas, and the Spanish artist is generous with surprises and amazing fruitfulness of fantasy.

“Disintegration” was created two years, completed in 1954. It partially repeats the previously written “Constancy of Memory”. The same watch dials melted in space, a distant rock and a branch on the left side of the canvas are ideally duplicated in the two works mentioned. Only all the objects of the composition in the new creation fall apart – disintegrating in an amazing way.

The wooden table in the left corner is now shown cut into identical bricks. Rhino horns have been added: they look straightened and staring off into the distance. A twig hovering in the air is fragmented into several parts; the clock on it still melts and bends, only the hand in the new version of the old painting is shown cut off from the white dial.

Objects “Disintegration” immersed under water. Ocean, deep water was associated by the surrealists with the human subconscious, mysterious, incomprehensible, but having its own logic. The surface of the water at Dali is suspended on another branch, it is similar to a plastic mirror.

What did the genius artist want to say with a strange name and a no less unusual picture? The Spaniard did not always explain the pictures, leaving a lot of space for thoughts and fantasies of the audience.

Let the plastic clock symbolize time, which can be perceived as fast or slow. But a fish with a red eye, a wondrous mask next to it and the “disintegration” of the picture make everyone think deeply and express their unique way of thinking.