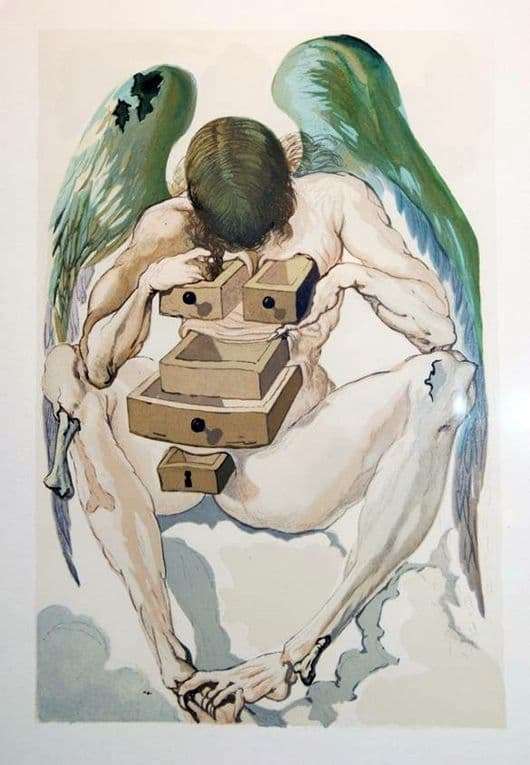 “The Fallen Angel” is a classic picture of Salvador Dali, written in 1951.

For an artist, an angel is a symbol of a certain mystical union. In Dali’s paintings, an angel usually accompanies Gala, his muse, whom the artist considered to be the living embodiment of purity and nobility. And the union bestowed by heaven.

The fallen angel in the picture is one. A naked man with shabby dark wings, inspecting drawers sliding out of his own body. He himself is also thoroughly battered, bones fall out of the body, to which the angel does not pay any attention.

In Dali, every little thing has a certain meaning. Sometimes this meaning is clear to the artist, but eludes the viewer. From the body of the fallen angel in the picture open several drawers. The result is a kind of casket. According to the artist, such boxes should symbolize memory. In addition, they symbolize the thoughts that need to be hidden from outsiders, a kind of “caches of thought”, hidden desires. The same boxes can be seen, for example, on the image of Venus de Milo.

The angel has his secret desires, invisible to anyone else, and does not see anything except them. Even when he himself gradually turns into ashes.

This angel is an illustration of one of the songs of “Hell” and is among the watercolors made by Dali commissioned by the Spanish government for the 700th anniversary of Dante. Work on the order took the artist nine years of life. As a result, every thousand lines of the poem received its graphic image.

The picture is not among the most famous. There are more famous creations, more shocking. There is a lot of philosophy, understanding of life. But according to many experts and researchers, the entire series is the pinnacle of graphic creativity of the shocking Spanish artist.