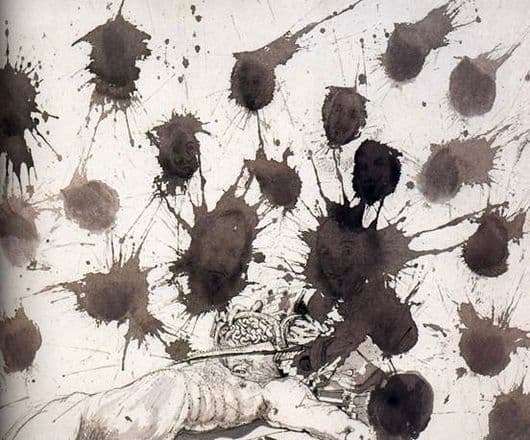 In his painting Anatomy Lesson, Spanish artist Salvador Dali continues to experiment with surrealism. Throughout his life, Salvador Dali was driven by the Nietzschean will to power, following the German philosopher freeing himself from all moral and moral compulsion, refusing to obey any rules and regulations. He was always ready for new creative experiments and preferred to rid himself of the rules of the sequence.

The phenomenon of Dali is still not fully understood. In his painting Anatomy Lesson, Salvador Dali is also far from any stereotypes and artistic norms. It is known that at one time the Spanish artist perfectly studied anatomy, but he prefers to paint the canvas without clear, tangible images, thereby making it at the same time uncertain and ambiguous. The Spanish genius of surrealism in the center of the picture depicts a man’s body cut into pieces for an anatomy lesson. This picture, as in almost all canvases of the artist, is devoid of reality and common sense: around a cut man, in smears and blots, similar to blood, the faces of various people studying his anatomic structure are depicted.

The picture is made in black and white, it is full of illusions and paradoxical combinations, symbols and philosophy. Like most of his canvases, Salvador Dali showed his uniqueness, singularity, and his individual style. The painting “Anatomy Lesson” once again shows the challenge of the Spanish artist to traditional styles of painting and “museum”, as he himself often called the classics, art. Surrealism was expressed not only in creativity, but was his way of being in general, Spanish artist was completely immersed in the irrationality. As a result, the most important work of surrealism was none of his paintings, but himself.