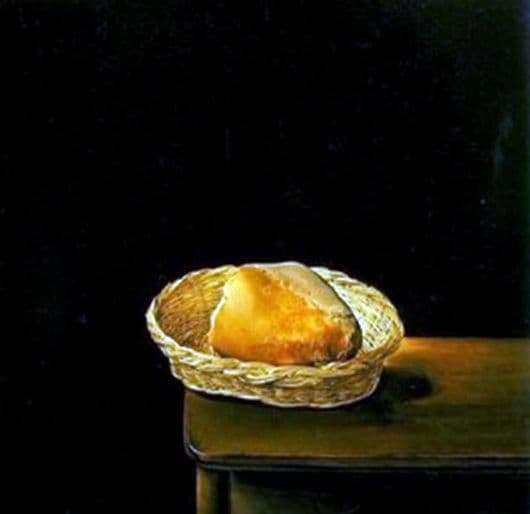 Dali still knew how to shake his art. Not for nothing, he was recognized as a genius immediately after the first exhibition. The truth is, not all were recognized, but only those who could understand the idea of the author and his fantasy.

But with this canvas amazing story. The author returned twice to this kind of composition. But only for the first time he depicted a basket of bread surprisingly thin and in a very different realism. That canvas was written in 1925. And exactly twenty years later, Dali returns to this composition again, but only this time everything is concisely strict. Black background, wooden bench, basket-basket and bread in it. But sometimes it creates the feeling that the bread is highlighted from the inside, as it is bright. It is so magnificent and on this dark background it seems surprisingly bright and diverse. This is what is confusing! It would seem that everything is clear here… and yet…

Dali often returned to the topic of bread. He considered this product the life of the body. Or even the life of the world. But there are a few more “tricks” in this canvas. If you look closely, the bread is drawn with a somewhat distorted perspective. It says only one thing: Dali did not forget his “I” and even in a more than realistic canvas, where everything was drawn in detail, he did not forget his style of writing. And vice versa, as if signed by a picture. Something like: “Yes, gentlemen, I wrote it.

Though not in my style, but the bread is clearly from my other canvases. ” And then it turns out that this is not simple realism, but an assumed, contrived. In principle, it probably is, the canvas was written in 1945, just then when World War II ended (here you have a black background), and the bread again began to be sold in Europe in unlimited quantities. But it was bread that was valuable during the war (and here is the symbol of peace and life).

Dali never ceases to amaze, even when he is clearly in a different genre.