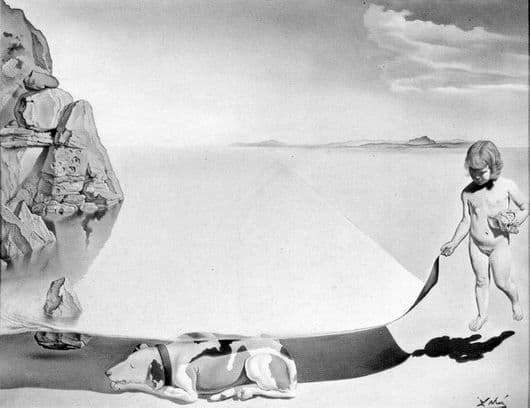 The glory of Dali was brought, of course, surrealistic works, executed in a specific, memorable style. Whether it is “Discovery of America…” or “Living Still Life” – any picture of this sense seemed to have been created beyond human vision, fantasy, imagination, and even dreams. What Dali did, always amazed, attracted and will attract, regardless of the person and the time when he was or will be born (or already born). The picture “I am six years old” actually has a much more specific name, but it makes no sense to cite it: not only does it describe what is happening on the canvas only “in brief”, the long version is rarely mentioned in catalogs and books of art historians.

Even more often, fans of the artist’s work call the painting “Dali at the age of six years”: this is more convenient and clearer. It was written in 1950 on canvas in oil paints. It is hard to imagine that what is happening on it could take place in reality. Background. In the distance, there are mountains and clouds in an almost completely clear sky. Foreground. We see a girl, obviously a six-year-old.

She vaguely resembles Gala (hairstyle, hair color). In her left hand, the girl holds a rather large shell, and with her right hand lifts, according to the name, “skin of the sea”, resembling a mirror or an absolutely smooth foil. However, from the stone on the left, there are circles. Not far from it is a rock. Under the surface of the “sea” sleeps spotted dog with a collar. Interestingly, the girl’s shadow does not touch her feet. The child either hovers above the ground, or has acquired the ability akin to what Peter Pen had. It is difficult to say exactly what Salvador Dali wanted to say.