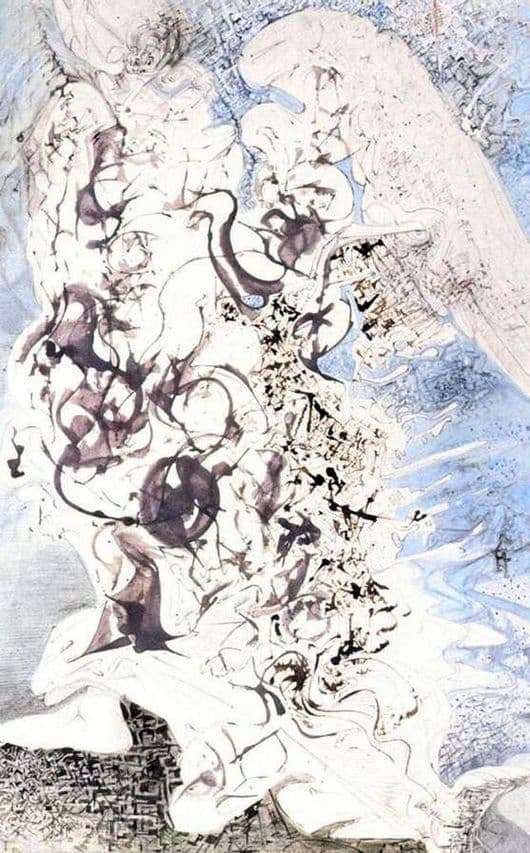 Dali’s canvases are known for their uniqueness and hidden meaning, in which everyone can find something that is close to his soul. The story of the origin of the painting “Angel” is as unsolved as the story of a person whose essence served as her inspiration.

It is no secret to anyone that while drawing the “angel” Dali painted the image of Amanda Lear (Amanda Tapp) of a famous French pop singer and model. Amanda’s biography was deliberately confused, and the real story of her life was hidden from publicity. Then it is not strange that this woman attracted Dali. After all, he had a passion for everything secret and unusual. What we can see in the picture “Angel”.

The canvas can be visually divided into two parts, one of which depicts the exact lines and contrast with the background, and the second, blurred like smoke, trying to merge with the environment. I think that Salvador saw this very way Amanda, on the one hand, a strong and bright personality, and on the other, an ordinary person who is trying to hide himself among the rest.

This picture was supposed to emphasize the uniqueness of the star, but also to show that it is the same as everyone. After all, in fact, “Angel Dali” is every person, just not everyone can show this or that side.

Another interpretation of this picture is an irregular puzzle piece consisting of fragments. Depicting the “broken”, confused life of the singer. She had a complex character and a manner of behavior that defied explanation. Dali felt in her own nature. Perhaps portraying “Angel” he portrayed himself, one that no one knew.

Black smoke on the “Angel” Dali portrayed, as it seemed to him, the senseless jealousy of his wife Gala to Amanda. Which was his first muse, but having learned that now such is not the beginning to be jealous of him. Gala gave ultimatums to Salvador, thereby trying to keep him. But still this did not prevent the artist from meeting Amanda. He did not like ordinary women, he needed those who aroused in him emotions and interest. That could inspire him.

Seeing the picture “Angel” the viewer may not pay much attention to it, but it should be considered fragments. After all, the whole consists of parts. Each part has its own history, its own life, pain and interest of the author. They can not be put together, this puzzle can not be assembled. Otherwise, everything will lose its meaning…