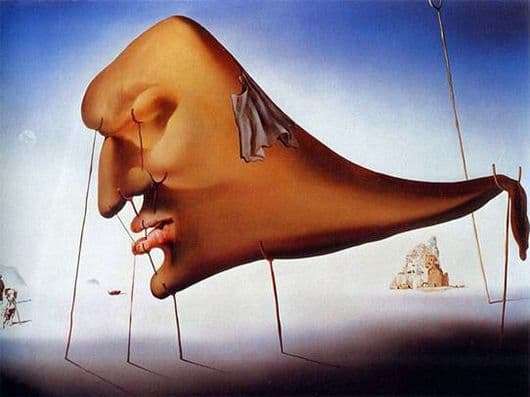 Before us is one of the most famous and controversial paintings by Dali, which entered the cycle “Paranoia and War.” A gigantic, almost amorphous head, an unpleasant bluish (if not “bluish”) shade, a head that is only a thin, unnaturally elongated thread of the “neck” associated with the body remaining on the ground seems to hover over the joyless world. In the opinion of the artist himself (who, incidentally, often mystified those who had the nerve to ask him “What is this in your picture?”), This “pupated monster” is the personification of the dream itself, which is ready to collapse and “grab” into a person as soon as only one of the eleven props disappears. But, on the other hand, these very props can talk about the fragility of sleep? Even an almost imperceptible dog in the lower left corner of the picture, as it turns out upon a detailed examination of this canvas

by Salvador Dali, it turns out need a backup.

Maybe the meaning is completely different? Maybe Dali meant not only the severity, but also the fragility of sleep and everything that we see in him? Remove the support – the head, the dream, even the dog will be broken… With Dali, who was not only an innovative artist and originally thinking person, but also the greatest mystifier! If we recall that contemporaries often accused Dali of excessive “posterity” of his style, that he was not so much a “surrealist” as an “allegorist” (as a result, he quarreled with his colleagues, saying “surrealism is me!” ), then the third interpretation of the picture suggests itself: If we assume that the images of the artist are allegories, more coherent than the images of “paranoia”, we see the head (and therefore the brain) of a sleeping person even attached to the Earth in a free soaring sleep some ropes, flowing out of the brain and firmly held, “What are these earthly memories?” Earthly friends? And the meaning of the picture, in this case, is as follows – even in a dream free flight, a person is NOT free from “earthly”. In a word, this is Dali’s signature canvas: something original, fascinating, rather for reflection than for decorating the wall in the living room.