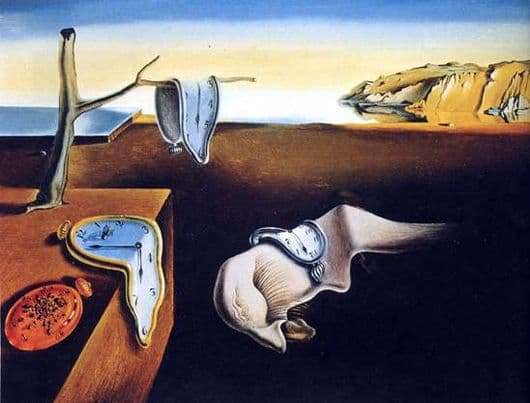 This painting, written by the great Spanish artist, a representative of surrealism, Salvador Dali. Virtually all of his works are distinguished by a unique and inimitable style and incredible implication that carries a certain meaning and value. “Constancy of memory” is one of the most famous paintings of the great artist, which has several versions of the name. So, besides the usual name, there are “Soft watches”, “Memory stability”, “Memory hardness” and some other names.

This picture is a kind of symbol of transience and relativity of temporary space. Paradoxically, but the idea of writing this picture came to the artist when he was thinking about melted cheese. Here he is, Salvador Dali… The picture is a relatively calm landscape against the serene background of which the clock slowly melts and spreads. The landscape itself is a kind of reflection of the inner state of the artist. Most believe that time is a kind of straight line that has a beginning and an end. But, in the opinion of the great artist, time is peculiar to change and stretch and most accurately could be portrayed in the form of “soft” watches.

Most often, Salvador Dali left entries in his diaries about his paintings, but not a word was found about the meaning and meaning of “soft watches”. Probably therefore, there are several theories of what exactly the author wanted to say with this picture. There is even a rather paradoxical version that with this work Dali expressed his own fear of male impotence – loose, shapeless clocks or forms. Whatever it was, Now it is a well-known work of surrealistic genre. At present, the surrealist painting “The Constancy of Memory” is in the Museum of Modern Art in New York.