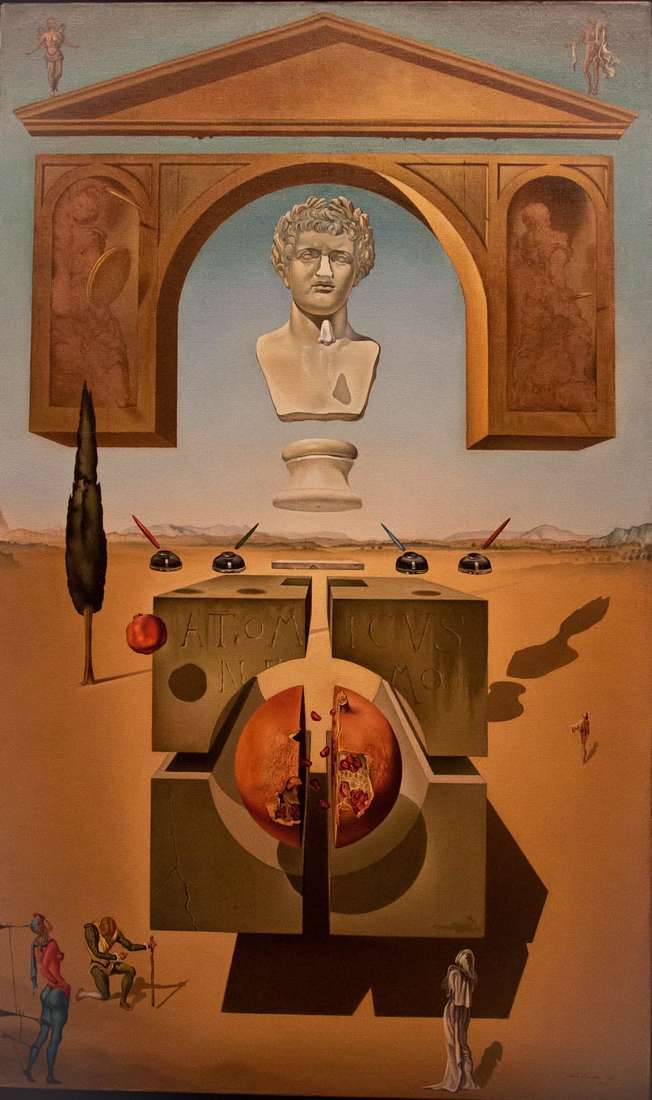 The Hiroshima explosion – a terrible one that shook the earth to its foundations and changed the course of history, influenced Salvador Dali. He, who had previously been interested in the structure of the world, the secret laws by which he works, nuclear physics, biology and other natural sciences, was fascinated by the very idea of a nuclear explosion. This can be seen in many of his paintings written after 1945 – “The Split Atom” is one of them.

An attempt to recycle the world in the picture, to make it different, not understood by the mind, but understandable by the heart. Here it is, an atom. A ripe pomegranate falling into two parts, enclosed in a solid stone monolith, on the side of which you can make out Greek letters indicating that it is an atom. Here are the people standing around – a gymnast in a bright leotard, bullying his head in silent enthusiasm, a young page, leaning on a sword, bowed in the bow. A woman, wrapped in a cut of white cloth, whose posture indicates attention and alertness. And he looks at this young man hewn out of stone with subtle, Greek features – the fruit of the influence of Greek painting and sculpture on Dali.

Above them, the temple arch, floating in the air, symbolizes divine participation in all spheres of human life. A lone cypress stretches to the sky from a desert plain.

This picture Dali contemporaries surrealists refused to recognize the art, like many other of his paintings. They did not consider Dali normal – his interest in Hitler seemed to them unhealthy, something deeply political. In fact, Dali was fascinated by the very figure of Hitler, his view of the world, the forms of his face and body. He never put anything close to politics into the dictator’s images.

However, the censure of fellow artists did not hurt him. Dali sincerely considered himself a true surrealist, and the rest – so, people without much imagination, who have nothing to say.