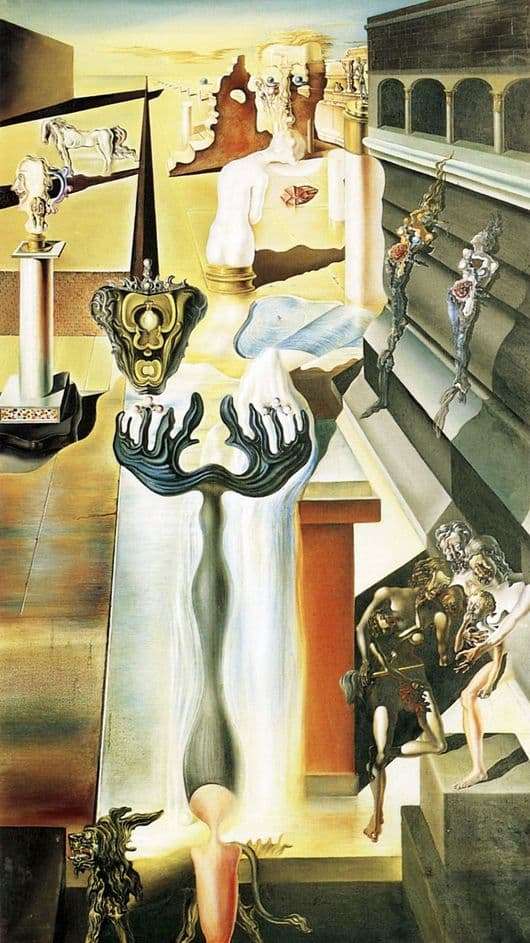 The painting “The Invisible Man” or “The Invisible Man” is considered difficult even for Dali. Some critics tend to evaluate this picture as a sign of the author’s schizophrenia, others see it as an experiment incomprehensible to them, and still others, proceeding from the philosophy of modernity, believe that their work pushes to think about their own existence.

In principle, the artistic method of displaying metamorphosis, applied in the picture, is applied by the author very often. Here, along with the meaning, the outlines of objects and figures are also hidden.

The picture draws attention to the long shadows, the use of which was perceived as a new idea by Dali.

What are the metamorphoses of the work?

You can see the face of a person who is certainly not simple. On it are symbols of a strong human mind from distant civilizations. But along with the face of a man, his fantasies open up for us, which seem to be in free flight.

The remaining figures of the painting “Invisible Man”, in principle, are not subject to unambiguous interpretation. Most likely, they are a fantasy on the artist’s personal life. In the foreground (in the lower left corner), Dali portrayed a monster who is not the main figure, at the same time to a certain extent exists everywhere.

Yet, no matter how original solutions this picture was, it was still a Dali work, and as always, whimsical and capricious forms and elements complement and single out the main image. For our case, this is the image of the “Invisible Man.”