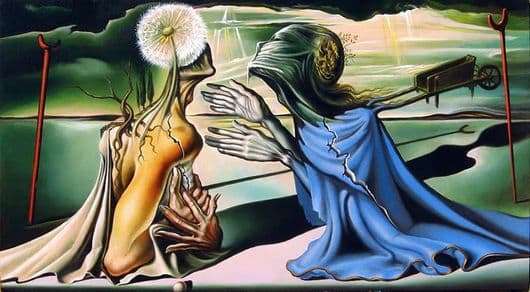 Dali was a terrible symbolist. It is the characters placed on the canvas. There is also a lot of interesting things, given that Dali just did not write his canvases. Let us look at the plot or even just remembered that long-standing story about these two lovers, and probably then we will understand why in 1944 this canvas appeared in the treasury of unsurpassed Dali’s masterpieces.

There was a war. Painful, hard and exhausting for any person, what can we say about the artist. And then suddenly Dali remembered this legend of Tristan and Isolde and decided to retell in his own way. And here it is, what happened… In the gray desert two beings are drawn to each other, but only one of them brings death in itself, the other – life. The female image is hidden under a dandelion and the woman’s hands clasp the breast, and on the back are the roots, that is, Mother Earth. And to her stretches to kiss her gray creature,

more like death in a raincoat – the destruction, the death of all that is dear to man. After all, once they unite and the life of the dandelion ends, the roots wither, the heart stops. That’s why this image does not reach for the gray mass.

On the contrary, it seems that she does not expect a kiss and is ready to dodge him. But it will not work, bony hands are already stretching, already attracts inevitability.

Dali deftly used the plot and of course disguised everything under symbolism. See how beautiful it is: war (he) and peace (she). The disgusting kiss of Judah and the loss of peace is as close as ever. But a crutch, a cart, and these slits of light against a gray background are all parts of the definition of a symbol. But what? The fact that the cuts of light – so it is that victory in the war is near. But a cart with a crutch…

How many reasons for reflection gives this picture. How much you can come up with definitions, concepts… and there is no certainty that they will be true. They gave contradictory, but it can be understood. And sometimes necessary.