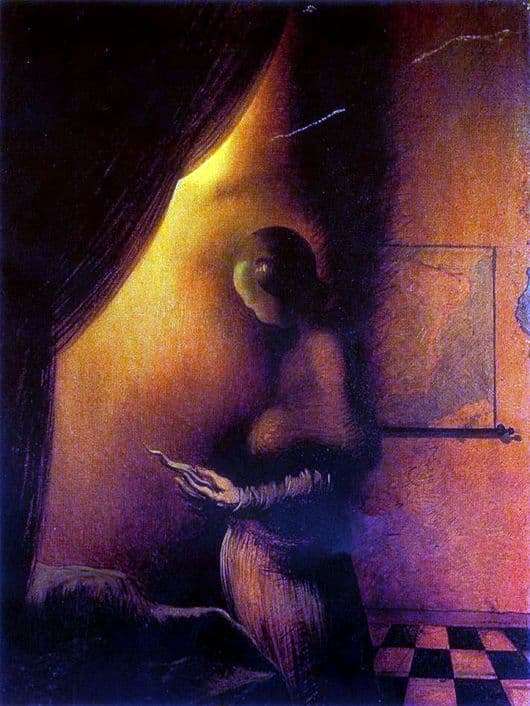 “Disappearing images” is one of Salvador Dali’s multi-faceted, multi-faceted paintings. It is known, for example, that he created a unique illusion room in which he used the facial features of the famous movie actress of the time, Mae West. The most famous in this installation is sofa lips.

Something similar can be seen in the painting “Disappearing images.” From a distance, the image in this picture resembles the profile of an old man, a bit like the artist himself. This is really an artist, but the other is Diego Velasquez, one of the idols of Salvador Dali.

If you take a closer look at the picture and look at it from a different angle, then the old man’s features blur, transforming into a girl standing by the curtains. In this picture echoes the famous picture of the Dutch artist Jan Vermeer “Girl with a letter.” The same girl, letter, drape. On the wall is a map. But if Vermeer

is a classic, realism, then Dali has surrealism.

Strictly speaking, Dali was not an innovator here. “Dual pictures” appeared long before him, as well as the compilation of people’s faces from various images. On postcards you can find images of poets, composers and even Sigmund Freud. But the genius of Salvador Dali was even manifested in the fact that he managed to keep the Vermeer play of light on the old man’s cheek – or on the wall.

Dali depicted in the picture two of his idols, the brightest representatives of art – Velázquez and Vermeer. Another could have become a copyist, a portrait painter, but the great Spaniard had his own, unique picture – “Disappearing Images”. It is believed that in the image of a woman with a letter he depicted his spouse – Elena Dyakova.

Cloth is located in the museum-theater, located in the artist’s hometown, Figueres, in the east of Spain. In the building where Dali once exhibited his first works.