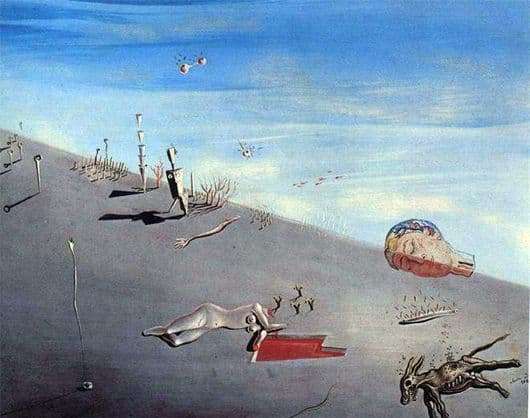 Etude “Honey is sweeter than blood” refers to the early period of creativity of Salvador Dali. The artist is just beginning his surreal experiments. In particular, a number of art historians described the etude attributed to pre-surrealism.

In the works of Dali of that era, the influence of the poet Lorca and other close friends is noticeable.

Later, the period of 1926-28 was called “the years of Lorca”. Lorca is in the picture – in the form of a head, half immersed in the sand.

The picture is characteristic of the work of Dali second half of the twenties. To imagine that period, it suffices to recall the famous eye cut by a razor in their collaboration with film director Luis Bunuel.

No, there is no cut eye in the picture. The eyes are there. There are many more. Severed heads, arms, legs, female mannequin, flies, stuck round a dead donkey.

The shore, studded with some objects, vaguely reminiscent of arrows.

Dali is in search. The so-called “Lorkovskie” paintings are characteristic of the early period of his work, and almost never occur a few decades later. They became a turning point in the work of the artist.

Like many paintings have given, the canvas “Honey is sweeter than blood” has several names. Initially, this picture was called “Forest adaptations.” The name was suggested by Lorca. After some time, the picture got the name by which it is known now.

For the first time this canvas was demonstrated at an exhibition in Barcelona in 1927 and was immediately acquired by the Duchess of Lermsk. Dali considered the picture as the main one in the series, which also included “Particles of Ash”.

15 years later, Dali returned to this title. The painting, written in the midst of World War II, depicts a naked woman half closed by clouds, and in the background is the centaur. This is a completely different Dali.