Home ⇒ 👍Dali Salvador ⇒ Description of the painting by Salvador Dali “Philosopher, lit by the moon and the waning sun” 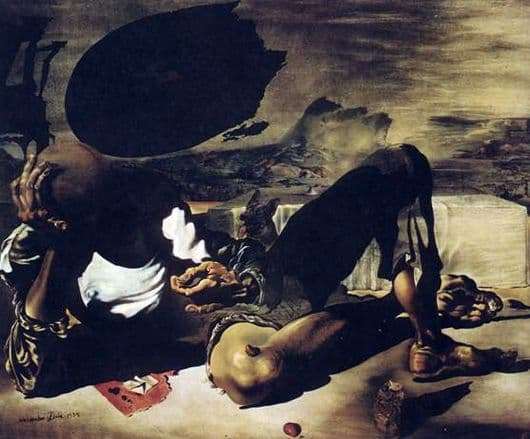 The painting “The Philosopher, Illuminated by the Moon and the Defective Sun” was painted in oil on canvas in 1939. The paintings of Salvador Dali from 1938-1949 relate to the period of his life and work, called the “American Dream”. During these years, the author was in America, together with his wife Gala, who, having divorced in 1934 with her previous husband, was finally able to become Dali’s wife.

The period of life in America has become very productive for the artist. He manifested himself in all branches of creativity, starting with paintings and ending with the release of his own newspaper. His productivity and perseverance at that moment of life would be envied by many. Dali liked America. She arranged for him that the Americans, at that time, were open to everything new, which gave Dali the opportunity, if not to be understood, then at least not to join the ranks of those convicted for not fitting into the generally accepted framework. The misunderstanding of anger and persecuted him in Europe, so America, he was incredibly happy.

One case in America brought Dali unprecedented fame and attracted many admirers to his work. Guide department store in New York ordered El Salvador window dressing. The artist, naturally, did everything according to the first category and in his extravagant style. As a result, in the window of the department store there was a black satin bath, above which was hung a buffalo head with a bloody pigeon in its teeth. This composition gathered a whole crowd who wanted to see and, on that day, it was impossible to pass along Fifth Avenue. The management of the department store closed the exhibition, which is not a joke that Dali was angry. He picked up a bath and threw it out the window through which he came out and was arrested by the police.

This case attracted a lot of attention to the personality of Dali, so the exhibition in the New York gallery, which the artist later held, was a huge success.