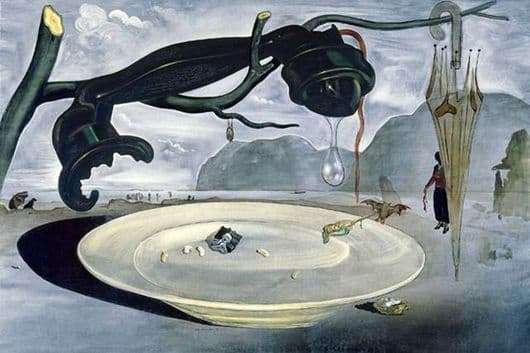 Salvador Dali wrote his picture “The Mystery of Hitler”, full of ambiguities, in 1937. It is believed that on the canvas the artist shows his concern about the inevitable beginning of the Second World War. Dali was very interested in the fate and personality of Hitler, could not determine the attitude towards him to the end. In different periods of his life, the artist spoke about him differently. He confessed that he was attracted by Hitler’s soft back, then spoke of him as a masochist, who from the very beginning knew that the war would be lost. It was in the year of the creation of the painting “The Mystery of Hitler” that Dali was more sympathetic to him than vice versa. At the time of the painting, Dali often depicts a telephone in her works. This picture immediately catches the eye of a black broken handset hanging on a dry broken tree and a folded hanging umbrella. Large tears drip down from the tube. Believed

Right under the handset is an empty plate, on it lies a few beans. This symbolizes poverty, hunger and the horrors of war. Around these items is a poor dim landscape: an empty beach and high mountains. On the side, people are drawn as a symbol of the departing world.

Also in the picture there are frightening bats, clearly not bode well. All these objects depicted in the picture are symbols of what the world cannot save, and war is inevitable, and all attempts and negotiations are useless in the face of an impending catastrophe. Salvador Dali himself later admits that he did not expect this picture to become prophetic. But at the same time he denied that he consciously introduced political overtones into his work. Dali wanted only to solve the riddle of the personality of Hitler and at the time of writing the picture he did not succeed.