Home ⇒ 🎨Dali Salvador ⇒ Description of the painting by Salvador Dali “A soft composition with boiled beans: a premonition of civil war” 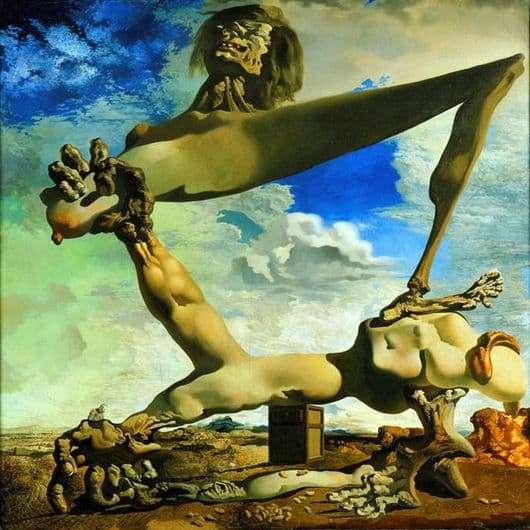 The painting entitled “Soft composition with boiled beans: a premonition of the civil war” was painted by world-famous Spanish artist Salvador Dali on the eve of the beginning of the Spanish Civil War, that is, in 1936 and, in essence, was a kind of reaction to in the country in these years.

Being a supporter of the Phalangists and General Franco, Dali hoped that the new state structure should finally bring structural changes to Spain, and Franco himself, judging by Dali’s convictions, could and should have done so much more for the country than was expected of him. However, at the same time, Dali created a rather contradictory picture from the point of view of his political sympathies, which amazes the viewer with its eerie essence.

The picture itself depicts two human-like creatures that seemed to have grown together with each other, but at the same time fighting among themselves. One of the creatures is something like a human head with a hand and a foot that has a terrible pain marked on its face. The second creature consists of two hands, which seemed to have been horribly distorted by nature itself.

It must be said that these creatures were depicted by Dali against the background of a certain ancient city with buildings of the past centuries, which stretched to the very horizon. The picture in essence hyperbolizes everything that happens on it, namely the desperate struggle of two bizarre creatures that have much in common with human bodies, but they are not. The threatening and ominous picture of what is happening is complemented by the clouds high in the sky, which should emphasize the gigantic spirit of the events taking place in the center of the canvas. It is these two creatures that depict some ghosts of the Spanish Civil War, the difficult years of which Dali found.