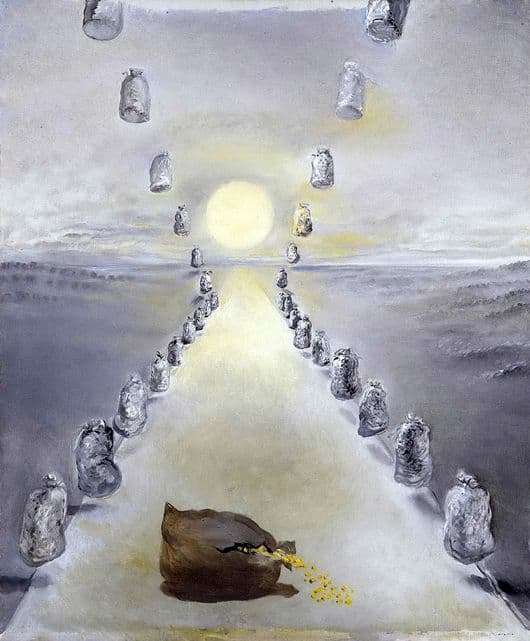 The painting “The Path of the Riddle” by Salvador Dali is one of a series of paintings under the title “The Last Role”, created for several decades, right up to the death of the author.

Due to age, it was difficult to paint, but it was these latter paintings that became perceived by art lovers in a completely different way. To the individual style of Dali added even more imagination and unusual. Surrealism in his work acquired the scale of the grotesque.

“The Way of the Riddle” is an unusual canvas, filled with deep philosophical meaning, own reflections on the artist’s life.

All the paintings of Salvador Dali are interesting because each observer finds something of his own, almost intimate. However, not every man in the street is able to appreciate the true artistic value of the paintings of the author. Some of them are annoying, they put pressure on someone.

Back in 1928, the artist wrote plots similar to the “Path of Riddle”. This determines the characteristic cycle in the work of Salvador Dali, which is also observed in other works throughout his life.

The Path of the Riddle is a mysterious road to nowhere, lit by the enticing moonlight, accompanied by an incredible array of bags hanging above the water surface. In bags of knowledge grains – the answers to life puzzles. The road itself is the life of the author, which ends beyond the horizon. And maybe – does not end at all. Who knows?

It is known that Dali, drawing the last picture in his mortal life, dreamed of writing another large series of canvases. In them he wanted to portray his dreams, infinity, the immortality of the soul and confused reality, inspired by the author’s grave illness at the end of his mysterious path.

Another of the strangeness of the great artist happened after his death: according to his will, the author’s body was not buried in the crypt.