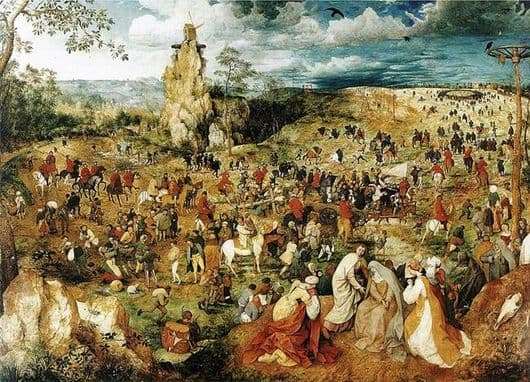 “The Road to Calvary” is one of the most famous paintings of the founder of the dynasty of Dutch painters Peter Bruegel the Elder. It belongs to the Brussels period of the artist. The composition of the canvas is quite traditional and was used, including by Bruegel’s contemporaries – for example, Peter Artsen.

The painting depicts a classic biblical story – the path of Christ to place of origin. This plot is very popular with painters of that time – so, the picture of a similar subject was written by the artist’s son, Peter Bruegel the Younger.

In Bruegel’s interpretation, a popular gospel plot is a collection of many people. Among them are both direct participants of the unfolding action, and curious citizens. This interpretation is typical for the Brussels period of creativity Bruegel. Christ is depicted in the center of the picture – and at the same time lost among other human figures. In the same way, the main characters of the canvas are difficult to distinguish in the painting “The Beating of Babies” or “The Sermon of John the Baptist”.

It is believed that in this way the artist emphasized the invisibility of any event, even of world significance, in everyday life. In the picture there is an opposition of the mocking crowd, the numerous, diverse and inconspicuous figure of one person – Christ, carrying his cross.

In this episode, Bruegel made a conscious departure from the canonical text of the Bible. According to the New Testament, part of the way was a cross carried by a certain Simon of Cyrene. In the interpretation of Bruegel, the Cyrenean is also present, as inconspicuous as the rest of the characters. The soldiers drive him away from the cross with a spear.

There is also some political component. Bruegel describes the scene as contemporary. As if the Spanish soldiers who owned Flanders in those years, lead to the crucifixion of a young Flemish Christ.