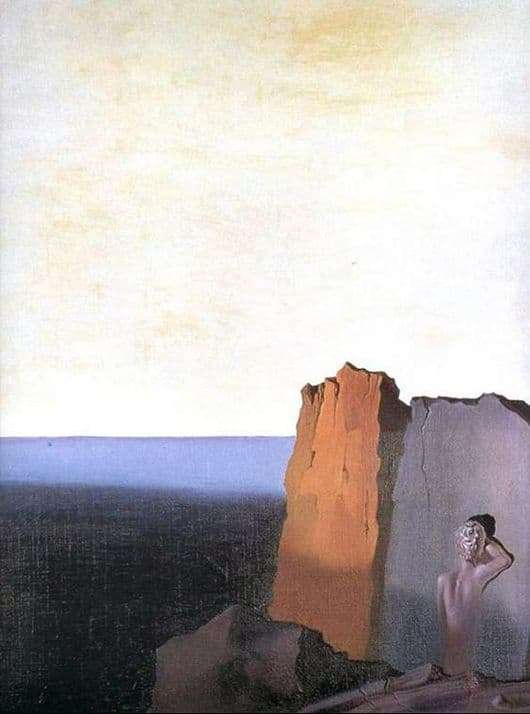 Work on the painting “Loneliness” lasted for several months. In 1931 she was represented at the exhibition, organized in honor of the creative work of Salvador Dali. This picture has a rich biography, it was in the hands of a private owner, who acquired it incognito from the hands of Dali himself, was in the Museum of Spain, and then came to the Salvador Dali Museum, where he is still in the present.

The huge blue sea depicted in the picture is a peculiar endless background for a solitary lonely rock. The mood of the picture suggests the thought of loneliness yellow-gray sky dark colors, a sad figure of a man, careless blue ocean.

In his picture, Salvador Dali very interestingly depicted a human figure. Who is this? Man or woman? The vagueness of understanding makes one even more think about the meaninglessness of the mortal world. All are equal before loneliness. All are equal before the infinity of the blue ocean.

The figure of a man, as if carved out of a sea cliff, because it is part of the stone block itself. The man is half naked, with the naked side he is open before the ocean, trusting him with his secrets, but with each new day he becomes more and more a part of a gray gloomy rock…

The picture of loneliness is depicted on canvas in oil paints, the original size of the painting is about 53 cm in length.

The work of Salvador Dali is considered to be “an amateur”, not everyone can understand the essence of his paintings, his thoughts, is there any meaning in his paintings, or is it just a rush of the creator – a genius. And the more people try to understand it, the more mysterious and mysterious are the paintings and the very soul of the artist.