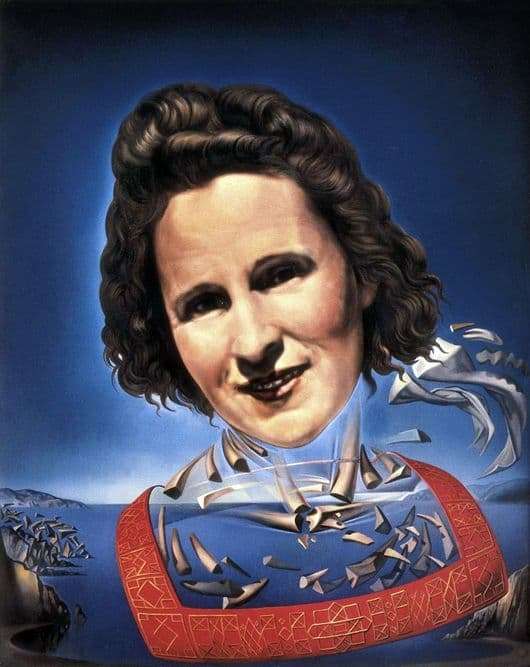 To say that Gala was present in the works of S. Dali, it means not to say anything either about Gala or about Dali himself. Gala was not just present in his work, she was his inspiration, muse, model, nurse and financial manager.

She is present in almost all the works where Dali has a female image. This is without taking into account a number of paintings, where she is the main figure.

At the same time, in what images she would not be (from allegorical to religious and mystical), her image is in fact always realistic. This also applies to the artist’s work “A Portrait of Gala with Rhinocene Signs.”

The painting was painted in 1954, in the period of the so-called. “Nuclear mysticism” in the artist’s works, when Dali was shocked by the atomic bomb in 1945, in his understanding of mysticism in the pictures he splits the whole as in the explosion and division of the atom.

At work “A Portrait of Gala with Rhinocene Features”, this creative period certainly left its mark, but here the artist didn’t completely depart from the traditions of the previous creative periods (“Paranoid-critical” and “American” periods). “Rhinoceros signs” in the picture are expressed in the symbol of the horns with their “twist”. In general, the rhino horn and weapons and decoration. Maybe that’s why Dali chose them. The whole and fragmented horns, as it were, make up the neck of Gala, whose face is clear and realistic. These horns, like atoms, as if disintegrating, create perfection, which Gala is for the artist. In the background are the same horns that are cut off from the cliff as if by an invisible explosion.

Critics, Dali’s fantasy on the topic of “rhinocene signs”, are considered as an artist’s allegory of the character and significance of the gala for his creative work. The horns are both smooth, and in the shape of a triangle, and sharp, and not very much – in principle, everything is like in the character of a beloved. A “whirlwind of horns” in space is limited by the likeness of a patch collar with red color, which denotes a contrast with the general soft background of the sky and water surface.

The interpretation of the characters present on it is different, but mainly indicates their religious and mythological significance. However, who besides Dali himself will take to unambiguously uncover the meaning of the portrait of Gala, depicted before that with lobster, now with lamb ribs, etc. And the artist himself, as in other cases, with the portrait cost paradoxically, boldly and provocatively, incl. in regards to gala.