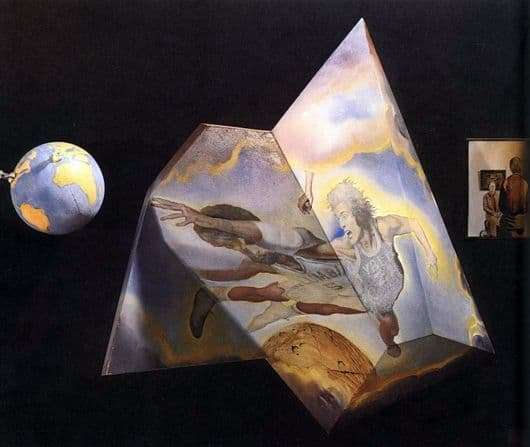 Salvador Dali’s painting “polyhedron” is painted in a surrealistic style. Many art critics attribute this work to the style of cubism. But with confidence we can say that the surrealism of this picture just rolls over. Anyone who is familiar with the work of Salvador Dali, immediately recognizes in the film “polyhedron” the hand of an unsurpassed master of surrealism.

On an alarming dirty green background is a crumpled sheet of paper. A kind of “crumpled picture in the picture.” Basketball players playing, indistinctly drawn on this crumpled sheet, threw the ball out of the picture in the form of a fragile glass Christmas-tree with the outlines of continents depicted on it. The Christmas tree symbolizes our earth, casually “thrown into the cosmic abyss – infinite space, behind which is everything, but nothing.

Many faces are depicted in this picture, most of them cannot be explained. Few people even managed to explain the ideas and thoughts embedded in the paintings of the artist. What do the squared people on the left side of the picture mean? This question has plagued many researchers of Dali’s work to this day. Each touch of the artist’s brush to the canvas is filled with mystery, tension and veil of riddles.

It is very difficult and almost impossible to unravel the idea of the “Polyhedron” painting, as difficult as the soul of the great Salvador.

The picture is full of anxiety, tension. Moreover, in this picture there are glimpses of psychedelic notes. This picture is considered to be a sample of the surrealistic genre. Dali was able to depict his intentions in the paintings in such a way that the seemingly unremarkable picture left a long imprint in the memory and subconscious of the one who was looking at it. The artist’s work “Polyhedron” is also no exception.