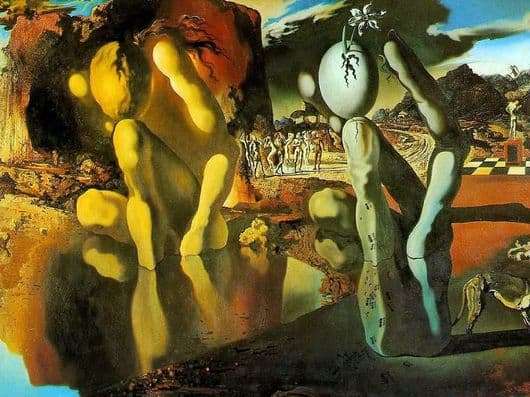 The painting was painted by the great Spanish artist in 1937. Many scenes were taken as its basis, but the story of Narcissus, a young man who, once bowed by a spring with pure water, was so subjugated by his own beauty that he died from the inability to satisfy his feelings, takes center stage. Narcissus worshiped himself and this love ruined him.

The legend ends with the death of a young man who has refused all blessings, including food, in order to satisfy the love of himself. The gods took Narcissus to themselves and turned them into a beautiful spring flower. Taking the beginning of the picture from Ovid’s poem, and based on the well-known ancient Greek legend, Dali created a sensual and beautiful piece.

In the foreground of the canvas, the viewer has the opportunity to see Narcissa himself in a thoughtful sitting by the water. Narcissus’s knees are turned up, and the head is lowered, so that it becomes clear to everyone that he cannot tear his eyes off his image.

In the background of the picture one can see a stone block in the form of a hand from several fingers. This hand holds an egg – a symbol of rebirth and new life, for a moment it seems that a narcissus is about to appear from it and it really appears. The background of the picture is decorated with a group of naked people, as well as a chessboard with a pedestal in the center. There are no other pieces on the board, which is also symbolic, as it simultaneously reminds Narcissus of immense love for his own persona, and of the solitude to which the hero condemns himself with his actions.

“Metamorphosis of Narcissus” is one of the most beautiful and symbolic works of Dali, for writing which he prepared special brushes and paints and even mastered work with completely unfamiliar techniques of applying strokes. Among other things, Dali wrote a small lyrical poem for the film, in which he compared himself with the main character, loudly proclaiming that he was Narcissus.