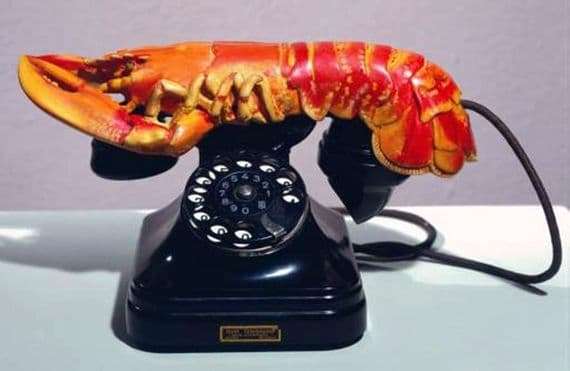 Dali – a mad genius of his century, artist, sculptor, director, writer, gushing with ideas and vital energy, who loved to shock the public. Hysterical, selfish, and insanely charismatic, he enjoyed the love of many people who are ready to endure his antics and ridicule. He was never serious and was always extravagant. He liked to embarrass people, to frighten them, to knock them out of a certain framework established by society.

His paintings are still trying to be understood, and some people are of the opinion that in fact half of them are joke, and not blood of the heart at all. Whether this is so, no one will be able to find out.

“Lobster Phone” is a sculpture created by Dali in collaboration with the artist Edward James, and this is a 100% joke – you don’t even have to argue about it. It is a disk telephone, to which instead of a tube there is a lobster mock-up, made of gypsum – the back of it is connected to the telephone with a cord, like a regular telephone receiver would be connected.

In sculpture, nature and technology merged, as they merged in the modern world. One goes into the other and looks very ridiculous at the same time – and this is exactly what the modern world looks like if you look at it in perspective.

In addition, Dali did not like the phones, he called them a means of spreading news, and thus expressed his protest against too rapid and too uneven progress, which turns the whole world into a lobster on a handset that looks silly and obviously out of place. He also said that one day lobsters would replace phones.

The joke was a success, partly because of how Dali filed it.

For example, at the first exhibition, where “Lobster Phone” was exhibited, the artist read a lecture in a diving suit and tore deafening applause.