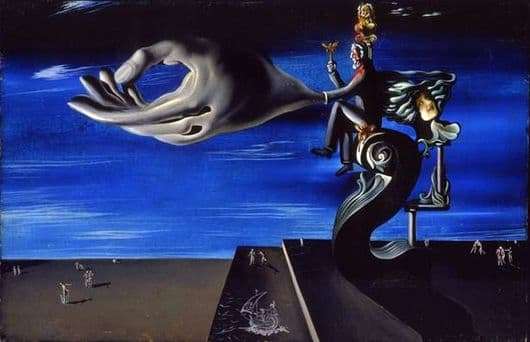 The masterpiece of Salvador Dali “Pangs of Conscience” is currently in the United States, the state of Florida, the city of St. Petersburg, in one of its private collections. Salvador Dali in many of his paintings depicts the hands. “Remorse of conscience” is one of the most famous paintings of Dali, where the hand appears. The canvas was written by the master in 1930, then he was not known to anyone yet.

Is that only Elena Dyakonov at that time believed in him and believed that he would become a creator known to the whole world. It is in the year of the creation of this masterpiece that she throws her husband and goes to Dali. Dali rarely suffered from remorse of conscience, this condition was not peculiar to him. Art critics believe that this painting reflects a rare condition for the master. There are evidence for this: in one of the many figures that are scattered on the canvas, the face of Elena Dyakonova. She is depicted sitting on a peculiar dollar sign, on the line where the border between the cubic gray city and the sandy desert chaos lies.

A large figure, striking when looking at the picture, most likely the master himself, Salvador Dali. His face is shown grim, matching the color of a large cloud, to which he extends his enormous hand. It is not clear what he is trying to achieve, whether he wants to catch the first drops of rain, or does not want to allow the awakening of the desert and shields the desired moisture from it. Dali and Gala, although they sit very close, do not look at each other, their heads are turned in opposite directions. This speaks not only of the remorse of the author of the painting, but also of his fear of the female sex. The picture is filled with deep blue. Green and yellow desert, the central character, depicted caricaturously,