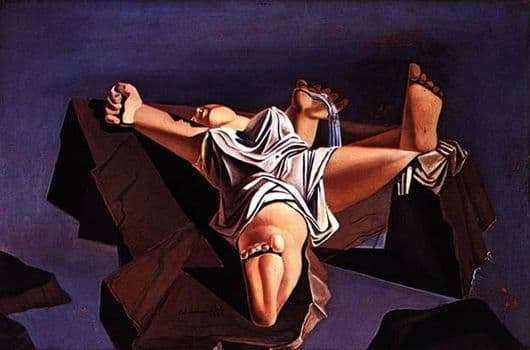 Surprisingly bright in its genre work. Dali this time slightly moved away from his surrealism and skillfully used another genre – cubism. It is difficult, but as you can see, it is possible. But this change in the genre has given unexpected results. This canvas is a complete confirmation of this.

Dali depicted here the flesh lying on the stones, but it is not just flesh – it is a human carcass spread on the stones, which lies on the stones in a rather strange pose. But, in spite of the strangeness of the pose, something else is read – loneliness. And this pain of loneliness screams in every muscle of a given body. And most likely this body is female.

After all, most often suffers from loneliness woman. But then before us is a powerful enough well-fed woman, to which certainly none of the men will ever fit. Because there is nothing subtle and feminine in this figure, except that the chest is covered with a white sheet. That is why loneliness! No one will approach such a thunder-woman. And here she is in despair, almost in the position of the crucified Christ, she lay down on the stones…

It is said that Dali painted this canvas influenced by the work of his friend Picasso. By the way, they were good friends, despite the difference in genres. Both are terribly prolific in their work. Both left a lot of reminders about themselves.

In the same Picasso, almost a whole street is occupied by museums. What is there to talk about Dali. But this canvas still stands out against the background of all the works of Salvador Dali from all the fact that it does not depict his muse – Gala. Yes, as a rule, and especially in the last years of his life, he increasingly devoted his canvases to his wife and painted it there. He couldn’t depict her so terrible, but every time he said that she couldn’t escape this despair.

Loneliness will always haunt us, no matter how long a person lives. Actually, over the years, she understood this herself.