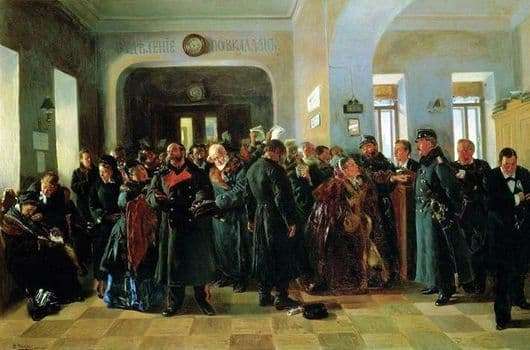 Makovsky painted pictures on various topics. They could be full of humor, irony or contempt. He is known as the creator of numerous paintings, truly showing all sorts of levels of Russian society of his time. Merchants, bureaucrats, nobles, artisans, peasants, beggars, tramps – all could become heroes of his paintings.

The eighties – the heyday of the artist. He wrote a lot of excellent works, among them the work “The Collapse of the Bank”, written in 1881. It narrates the tragic ruin of the Loan Bank in Moscow. Makovsky showed an episode when investors came running to the bank, hoping to save at least some of their money. They still can not believe the likelihood of such a daring robbery. The room is dominated by cold light.

The picture feels the turmoil that occurs at that moment. Every person is unique. In the posture and gestures of a person we can assume the character that the artist intended.

He masterfully conveys various reactions to the same event: despair, grief, anger. Someone is standing with a thin face, the other is trying to figure out what to do, or is loudly indignant at what has happened. On the left is a grandmother, who became ill from this message. After all, perhaps her last money was gone.

The painter attaches great importance to the coloring of paintings. Cold colors predominate on the canvas: gray, black and blue. The colors are soft and do not differ in brightness. With the help of this, expressive faces, postures, gestures are demonstrated. Thereby showing the stereotypical behavior of bourgeois society.

The originality of the plot attracts viewers. Looking at the picture, you feel a sense of compassion. After all, the picture tells about the difficult fate of ordinary people. Most likely, the plot was conceived with a view not only to show the past, but also to think about the future, since the event is relevant at the present time.