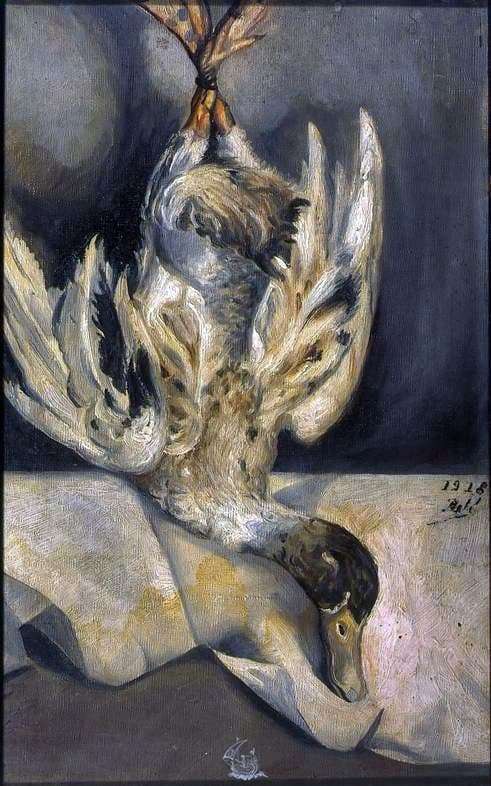 The picture shows a duck, most likely cooked for sale or for further preparation for food. Dali, having already become more mature, tried himself in different styles, but his early work, “Duck”, does not look like them at all.

The duck is depicted realistically, she hangs with tied legs and waits for her fate. Her eyes are closed, her wings are carelessly spread to the sides, and her tail is lowered. In this duck the artist quite accurately and vividly depicted the plumage. Each feather can be considered, and to imagine how, during life, this duck swam across a clean pond, turning over the water surface with its paws, cleaning its shiny feathers with a large beak. Now you will not envy her fate. She will be someone’s dinner.

The background of the painting is plain and unremarkable. The attention of the viewer is attracted only by the main character of the picture – the duck itself. The head of a duck is resting on a piece of paper sheet or a white napkin. The curves of a white piece of paper or napkin are difficult to determine to one or the other.

Most likely, the duck is in such a position quite recently, the white surface of the leaf is completely clean.

The brown and green tones used in the picture interestingly go one into the other. Tied paws and a head lying on the table, it is not clear when looking at the detail whether the duck is hanging or leaning against the wall.

It is difficult to imagine that this picture could be written by a 14-year-old boy. The work was done professionally and is not at all like the late, already mature works of the surrealist artist. Not every fan of the work of Salvador Dali will be able to define his brush in “Duck”. A duck is the work of an already experienced artist, but who has not yet revealed himself to the end.