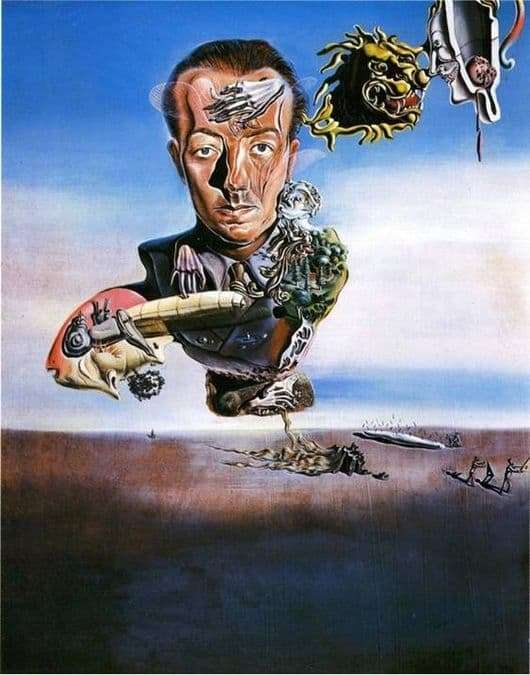 The history of the creation of this picture began with parting. In 1929, Dali came to his beloved Cadaqués. Once he decided to visit (to his misfortune) the French poet Paul Eluard with his wife Elena Dyakonova, who would later be known to fans of Dali as Gala.

Initially, the woman did not take the eccentric artist seriously, but then she managed to look at the surrealist figure as an extraordinary person who won her heart so much. The result of this situation was the decision of Gala to leave Eluard and to connect his life with Dali.

The artist, in his own words, should capture the face of the unfortunate poet – as compensation for the stolen muse. However, despite the fact that the portrait was declared, the picture largely reflects the feelings of Dali himself. So, the canvas is saturated with Freudian symbols. The very head of the poet hovers over a dull landscape, so characteristic of the works of Dali. To the right of Eluard is the head of a lion, which, according to the artist, symbolizes his fear of women.

A woman’s head, made in the shape of a jug, also indicates loyalty to this interpretation. Again, this motive is inspired by Freudianism, something like “a woman is a vessel that should be filled”. To the left of Eluard, the artist himself is depicted with locusts across his face. This insect also repeatedly appeared on the canvases of Salvador Dali. It is for the artist the embodiment of all the fears that only he can experience.

Introduction of the image of the locust has a purely psychological motivation: Dali was afraid to death of these insects, which his not-so-good schoolmates used to do while studying at the Academy.