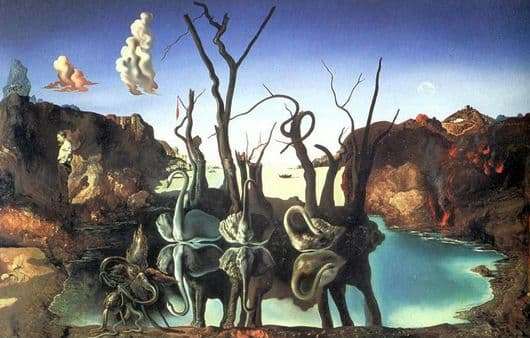 The famous Spanish artist Salvador Dali created the painting “Swans reflected in elephants” in 1937. At the dawn of his work, Dali was fond of impressionism and cubism, and then began writing in the genre of surrealism, considering himself the only true representative of this trend. In his paintings, Daly used his own method, which he defined as “paranoid-critical activity”.

In this manner, the “Swans reflected in elephants” are written, representing a double image that embodies visual illusions and hallucinations. The canvas causes an ambiguous interpretation. Through reflection in the lake one can see how parts of different objects transform into each other: swan heads turn into elephants, and branches of dark bare trees become bodies of elephants. Why elephants? It is known that these were Dali’s favorite animals, he considered them perfect creatures for their gentle and devoted care for

the cubs. It is assumed that this image reflects the differences of the artist with his parents.

On the left you can see a man, hunched over and turned away from the water. It is not known what will happen if he turns around – maybe a mirage with swans and elephants will disappear? The figure of a person enhances the feeling of anxiety, uncomfortable and oppressive atmosphere, but at the same time deep immersion in what is happening. It is believed that the person in the picture is Dali’s self-portrait.

The basis of the picture formed autumn landscapes of Catalonia. The artist’s brush displays a distinct contrast between the cool smoothness of the water and the rough protrusions of the surrounding rocks. The horizon in the picture is not empty: in the distance are visible some buildings, a floating boat. But the composition is constructed in such a way that the key figures tightly rivet attention, creating a conflict between the real and the unreal – that is the main idea of the picture.