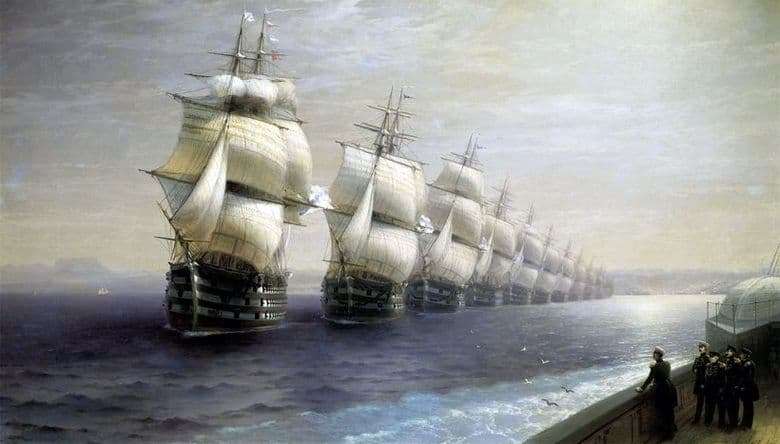 The work was written by Aivazovsky Ivan Konstantinovich in oil on canvas, 136.5×249 cm in size, is currently stored in the building of the Central Building Museum (Central Naval Museum), St. Petersburg.

The picture can be attributed to the genre of memoirs – Aivazovsky at that time personally had the honor to be present at the raid during the Black Sea Fleet review in Sevastopol. The author was among those accompanying Emperor Nicholas I, who hosted the parade. All who conducted the review were on the frigate “Vladimir”.

At the bottom of the picture on the right, we can see a group of commanders in chief. Here they play a huge role in the fleet review: the emperor and his companions – Nakhimov, Istomin, Lazarev, Kornilov. The emperor stands directly beside the side, leaning with both hands on him. At a short distance, relying on etiquette, Nakhimov and Istomin settled to the left behind Admiral Lazarev (performed the duties of the commander of the Black Sea Fleet). To the right of the admiral is the commander of the Kornilov headquarters.

Warships are lined up in a straight line. The first frigate – “The Twelve Apostles” (120 cannons), followed by the “Rostislav”, “Yagudiil”, “Svyatoslav” (they all have 84 guns each). The sea is calm, gray. Most of the frigates, which are sealed on the canvas, after 4 years participating in the Battle of Sinop, will be sunk in the bay of Sevastopol.

In 1886 (the time of painting) Ivan Aivazovsky had already ceased to use festive bright colors in his works. Gray, blue, white and olive colors help to achieve harmony in the painting of the artist.