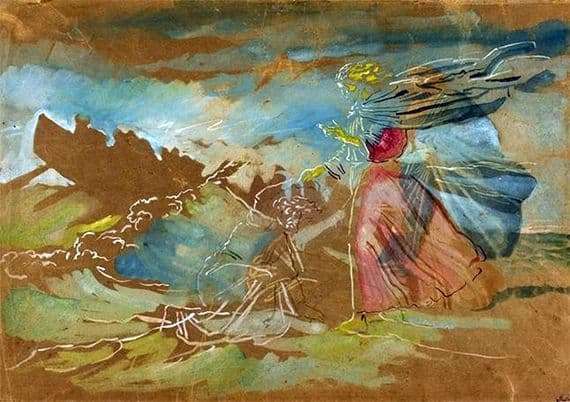 The famous painting “Walking on the Waters”, artist Ivanov, painted in white with a watercolor on brown paper in 1850.

The master brush decided to illustrate an episode from the Bible (the gospel of Matthew), in which the apostle Peter watches with great amazement how Jesus moves along the surface of the water. Being completely amazed, Peter implores his Master to have mercy on him and give him an opportunity to come closer.

The calm and peaceful Jesus tells the apostle to approach him. Peter obediently obeys, but a sudden wind starts scaring him. Under the weight of his body, Peter goes to the bottom, and Jesus helps him to get out and reproaches Peter because there is little faith in him, because such doubts were pulled under the water.

Depicting the plot of the picture, the artist very harmoniously combines the technique of execution. The figures depicted on the canvas are only light-air silhouettes. The color scheme of the canvas is very diverse, but there is no sorting of tones. Jesus’ robe, which develops in the wind, as well as rising waves, visually give the picture a barely noticeable movement, enliven it. There is one more special detail on the canvas: the unpainted episode on the left forms the outlines of the boat that tilted.

A great influence on the apperception of the image depicted on the canvas is exerted by the play of light, which gives the fragment its brightness, radiance, and even some mysticism. Such small tricks of the artist’s manner of execution allow the viewer to experience unforgettable emotions from the contemplation of such magnificence. This masterpiece of art pacifies a person, makes him spiritually richer. When working on a picture, the artist used not only the color scheme, the play of light, he put a piece of his soul into it.

This picture has an amazing property: it fills the contemplator of the wonderful “biblical sketch” with inner light.