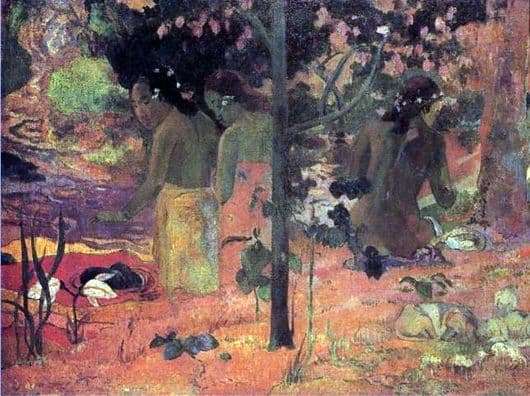 This picture is one of the most expensive paintings in the world, which were sold in the XX-XXI centuries. The piece was sold for fifty-five million dollars in two thousand and five.

The presence of decorative in color, as well as plane and monumental composition of tones are very close to the then popular style called “modern” and played a special role on most painters of the Nabi group and other cultural figures of the early twentieth century. In addition, in this work Gauguin gave a special emotional meaning to the color scale, lines and other properties of the form.

His picture is distinguished primarily by the tendency to the decorative component of color, and the underlined expression of each line and silhouette. This emphasized the entire style of Gauguin.

Thanks to the life of a native in Tahiti, this picture was born. Or rather, due to the impact on him of the impression received from the exotic society and a completely new and mysterious culture for it. It was this work that helped him finally find his own style.

In the picture he depicted Tahitian women in the form of bathers, and most importantly he emphasized their freedom, independence and beauty, whose life passes in unity with the unique and inspiring nature of Tahiti Island. The canvas itself is presented in festive colors, likened to a bright decorative panel, and the motifs resemble the outlines of Egyptian, Greek and Javanese cultures.

In his painting The Bathers, Gauguin particularly emphasized his Gogenov style in the form of planar canvas and bordering his contour, where the color gamut was distributed by large and sonorous planes and acquired the presence of planar independence.