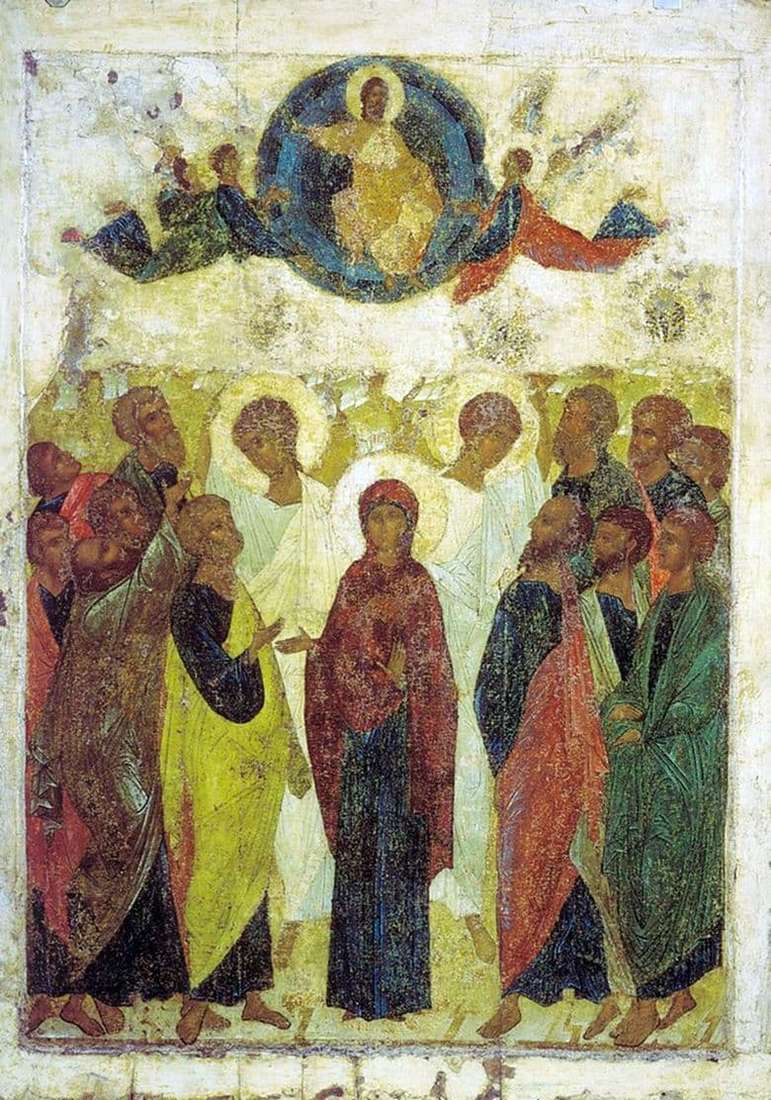 The Assumption Cathedral in Vladimir was famous for its frescoes and icons. The main icon painters working on the internal space of the building were Andrei Rublev and Daniel Black. It was under the watchful eye of Andrei Rublev that these two masters created the icon of the Ascension of the Lord.

This icon depicts one of the most important moments for the Orthodox Church in the life of Jesus Christ – the Ascension. According to the New Testament of the Bible, after Jesus was resurrected, he still appeared to his apostles for forty days. He told his followers about the great Kingdom of God day and night. On the fortieth day, he asked his followers not to leave Jerusalem. Together, they climbed to the top of the mountain. The icon shows us the very moment when Jesus ascends to heaven to his Father. The son of the Virgin Mary is depicted in a large round cloud of blue and black. A cloud raises two angels to the sky. Jesus is depicted in a golden robe, above his head a golden halo. The male figure is traced in a sitting position, legs slightly crossed.

Under the cloud, we see a crowd of people – these are the 12 apostles who escort Jesus and wait for his return back to earth. This icon is also a prophecy that there will someday be the second coming of Jesus, he will also come down to the people on the same cloud.

The icon was painted in 1408. Most of the work was badly damaged and crumbled over time. But one thing is clear that the artist used very bright, saturated colors when drawing the figures of people and angels. The apostles are wearing red, green, and blue robes. The background is gold, which emphasizes the importance of the figures depicted on the icon. It is also worth noting that the outlines of the city walls and roofs are visible in the background. Apparently, this is Jerusalem – the city in which Jesus preached.