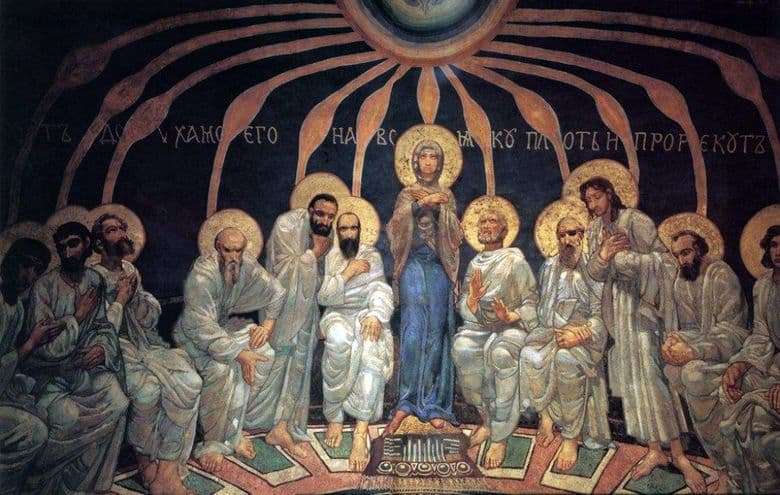 The tremendous work of Mikhail Alexandrovich Vrubel, The Descent of the Holy Spirit on the Apostles, is adorned with a cylindrical vault of the Church of St. Cyril, located in Kiev. The work refers to the first works of the painter.

According to the Gospel, the Holy Spirit came in the form of a dove to the apostles. Flames emanating from the bird rested on their heads. From now on, the apostles began to speak all languages, which allowed them to spread the teachings of Jesus Christ throughout the world.

Like all gospel legends, the plot of Vrubel’s “The Descent of the Holy Spirit on the Apostles” had its iconographic method, enshrined in a long tradition. Painter relentlessly followed this method. Most likely, the painter turned to the most ancient biblical miniatures, but his characters are interpreted somewhat differently, one feels the influence on the modern school of painting.

12 apostles sit in a semicircle, so tightly literally repeats the semicircular church vault. In the center we see a figure in a dark blue dress. The image is guessed Virgin. The picture is dominated by a blue color palette: a bluish background and pale blue robes of the apostles. Especially stands out the golden light emitted from the Holy Spirit in the form of a dove. If you look closely at the clothes of the apostles, you can replace the bright areas that create an unusual effect of glow. All the apostles are embraced by a general high spiritual growth: someone is thoughtful, someone presses palms to his chest, someone squeezes his hands tensely.