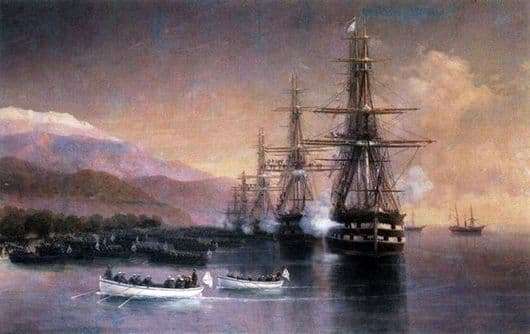 Creativity Ivan Konstantinovich Aivazovsky is an element of professionalism. The artist is representative of several of the most famous graduates of the Academy of Fine Arts, such as the Florentine and Amsterdam. During his activity the artist founded the museum of antiquity.

Pictures of Ivan Konstantinovich Aivazovsky brought great fame. And it is no coincidence, because he was not just an artist, but above all, a patriot. Depicting a picture, the artist, with every stroke of his hand, glorified Russia, thereby confirming that he is a real citizen of his homeland.

Many paintings depict the native city of Feodosia, namely the incomparable beauty of the sea coast, be it calm or raging, often entering into an unequal struggle with man.

Aivazovsky was engaged not only in painting, but also took part in hostilities that took place on the Crimean coast. So the famous painting “Landing in Subashi” was created. The sea coast of the Subashi valley reflects the still undisturbed calm by the soldiers.

The calm expanse of the sea fascinates with its beauty, calmness, on which the menacing squadron of fifteen ships prepares for the battle for their city. In this valley, landing and landing. The palette of colorful paints visible on the canvas with the naked eye, it seems that the viewer is in the center of these events. Huge ships lined up in a row, and are preparing for the next attack of the enemy. The view of the sea is simply irresistible.

Ivan Aivazovsky loved his homeland very much. In each picture he painted, he glorified the victory of the Russian fleet over his enemy. Like the painting “The Landing in Subashi”, and other paintings testify to the glorious defenders and invincible strength of the navy of Russian sailors who are ready to fight for their homeland until the last battle.